We will have to turn back time many years, most specifically in 2011, when Coroner announced that they were working on their very first DVD by capturing on tape various shows of their Reunion Tour while at the same time, the band was aiming for a live record that never saw the light of day. Instead, we are treated here with a bonus CD comprised of 8 songs thus making the purchase of “Autopsy” really tempting as now the whole package includes 3 DVD + 1 CD! But let’s take a more detailed look, shall we?

The first DVD is called “Rewind” and it’s essentially a 100-minute documentary in which we get to see the band members sitting in front of the fireplace and looking back in the past, glory days. Of course, there is plenty of archival material while many well-known names of the thrash scene pay their respect to the great Swiss band. 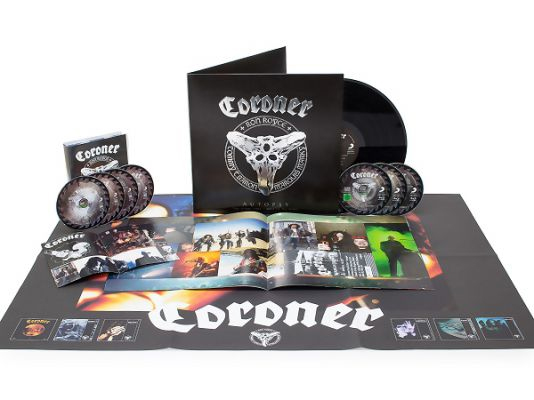 The second DVD (“Reunion”) includes 16 live songs that were shot with HD cameras in various European cities and includes many familiar songs from Coroner’s back catalogue like ”Masked Jackal”, ”Son Of Lilith”, and ”Semtex Revolution” while the closing “Reborn Through Hate” is cued from the band’s show at the Gagarin Club in Athens, Greece. We must also point down that the additional material is also remarkable as it includes 50 minutes of backstage footage, among which we get to see Coroner admiring the ancient monuments of Athens.

The third DVD is called “Archives” and it includes the classic live of 1990 in Berlin, 3 promo videos and various live excerpts from 1986 up to 1996…that is, up the band’s break up.

This box set by Coroner, with a total running time of more than 5 hours, is naturally more than satisfying. Coroner has already announced that is working on a brand new studio album – the first after “Grin” that was released in 1993!- so we anticipate with a huge anxiety for the new material that will most likely see the light of day in 2017 by Sony Music.