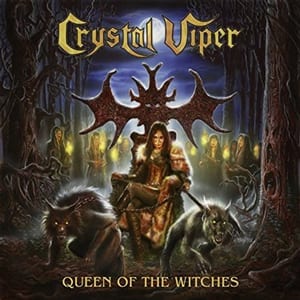 The Polish band Crystal Viper returns with the sixth studio album in 14 years of existence and after three years of absence due to personal reasons of the band’s driving force Marta Gabriel. Marta is not only the frontwoman and guitarist of the band but is also responsible for all the music and lyrics as well as the wardrobe! She is the very soul of the band and it seems that she returned strong and vigorous. I still remember the sensation that the debut caused back in 2007 through the underground label of Karthago Records. It made the difference in the status quo of operatic female vocals with a style that combined Leather Leone with Doro Pesch and compositions between classic heavy metal and power. The band proceeded with a string of quality releases which didn’t match The Curse of Crystal Viper though. Queen of the Witches is in the same path as the previous albums, featuring contributions by Ross the Boss, Mantas and Steve Bettney (Saracen). Most songs are in a fast and uplifting pace and the indifferent ballad Trapped Behind sounds kind of odd since a couple of songs later we find We Will Make it Last Forever with Bettney’s enchanting voice. The last song is a decent cover version of Grim Reaper’s classic See you in Hell. This is yet another positive work from the band that seems to have emerged unscathed from its hiatus.