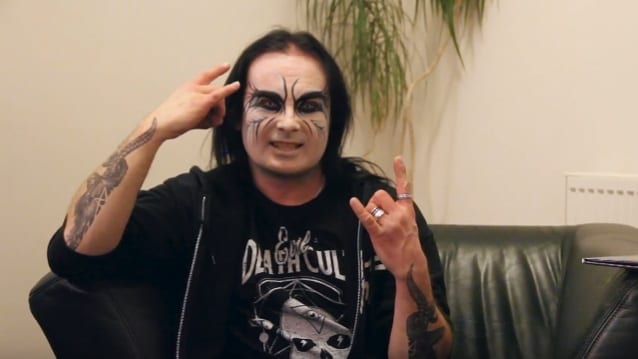 Sam Sheppard of Mammoth Metal TV conducted an interview with frontman Dani “Filth” Davey of veteran British extreme metallers CRADLE OF FILTH prior to their January 28 concert at Columbia Theater in Berlin, Germany.
When asked about SLAYER’s recently announced “farewell” tour, Dani Filth said:
Dani: “I don’t believe it for an instant. I fell for the Ozzy [Osbourne] ‘touring for the last time’ in ’83 or whatever it was. [Editor’s note: It was actually in 1992.] I think SCORPIONS have done it; ACCEPT have done it. We’ll see. I mean, if the money’s right, people come out of retirement. Maybe it’s another way to boost their sales a bit, announcing the last tour. I hope it’s not their last tour. It would be a bit sad if it is. I think the same applies to them as with people like [Glenn] Danzig. Just think, do I need to be doing [it]? Am I comfortable? They’re probably comfortable enough to be close to retirement. They get paid well for gigs. I think they’ll be alright.”