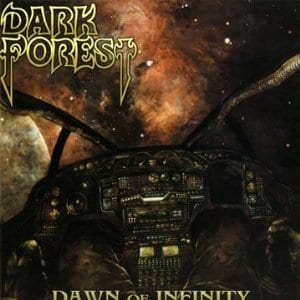 As time progresses, I see more and more bands trying to re-invent the music of the 90s the 80s and even the 70s. Some bands are making a really good job. Bands like White Widdow  and Graveyard  have established a reputation by playing music that flourished in the 80s and the 70s.
The UK based band Dark Forest tries to do something similar in their second full length album entitled “Dawn of Infinity” in 2011. Their original singer Christian Horton stepped back as a vocalist and the band welcomed Will Lowry-Scott as their new singer. Horton remained with the group as a guitarist.  “Dawn of Infinity” will create a nostalgic feeling to the fans of early power/NWOBHM. The album feels like it is a lost recording of late 80s early 90s power metal band.
The album is full of classic metal riffs and melodic leads that can get you head banging in no time. The new vocalist really fits the band and the vocals are really catchy and can make you sing-along in no time. Inevitably while hearing “Dawn of Infinity” bands like Iron Maiden and Hammerfall come to mind.
The problem with this album is that there is more than just a nod to Iron Maiden and Hammerfall. There are lots of twin guitar solos and catchy melodic choruses that we have heard more than once before.  The vocals are not as good as Dickinson’s but Will Scott has a good high pitched voice that gives an extra edge to the songs.
If we overlook the similarities this is a pretty decent and enjoyable album. Songs like the opening “Hourglass” “Lightyears On” and “Deadly Premonition” are making this album worthy of notice.
Overall, “Dawn of Infinity” is a record that will create some nostalgic feelings to old school NWOBHM fans. If Dark Forest try to put some more originality in their music will be a band that will be talked about a lot in the future.