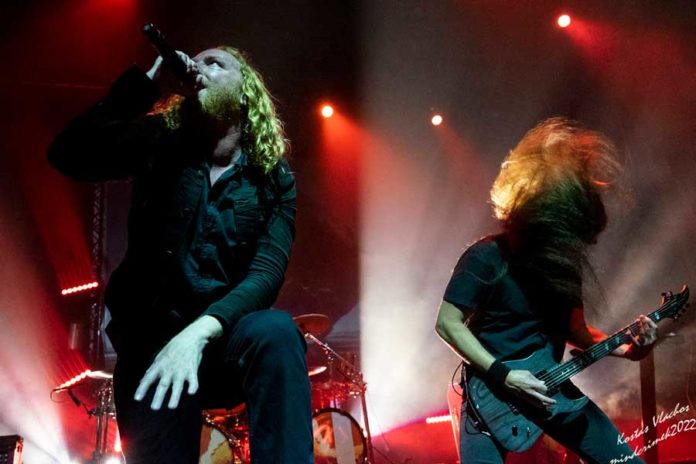 The truth is that I find it difficult to put my thoughts and feelings in order after a concert by the huge band called Dark Tranquillity. The beloved Swedes are something unique. Also, it was really nice that the whole billing of the tour came for a show, something we do not often see in our country. But let’s start from the beginning.

First of all, let me emphasize something that should be taken for granted, but here we are not so used to it. The announced schedule was kept to the minute and those who helped in it deserve a big bravo. Gwendydd from Bulgaria were called to open the night and made me think that it is just the second band I see from the neighboring country. They started as an all-female band but after two changes behind the drum kit, they broke the…rule and put a veteran of the scene in that position. They play a modern melodic death metal/metalcore that reminds a lot of Arch Enemy, they had a good sound and they certainly managed to win over a lot of people who had come from the beginning. The girls (two guitars, bass, vocals) were mostly static, which I do not know if it had to do with the limited space on stage or maybe with some anxiety due to the fact that they are all just in their early twenties! The only downside I could find in an otherwise very good performance was the pre-recorded backing vocals. I can understand the various samples they had, but the vocals I don’t. Especially when Vicky Stoichkova has great death growls and it was a delight listening to her screaming.

Moving on with Pyogenesis and the big surprise of the night! I do not know how many knew them, although we are talking about an old band, but surely their awesome performance made the venue pay attention to them. It wasn’t just the weird entry of death in their mostly alternative metal/rock/punk sound (they started as a doom/death band after all), nor their outfit with shirts, vests and ties but the fact that they had an incredible energy and constant movement on stage, trying to stir up the crowd in every way. The highlight was when there was a problem with the second guitar and the singer made the well-known games with the audience, making us all sing the chorus of “You Give Love A Bad Name” in the end.

Actually, the Germans gave a seminar on what a band should do when playing in front of people who do not know its music. Really enjoyable and worthy of every applause they received. A special shoutout to guitarist Von Marengo for his crazy one-man show. I would see them again without a second thought.

Setlist (με επιφύλαξη): Steam Paves Its Way (The Machine), Blaze My Northern Flame, Flesh And Hair, Through The Flames, Will I Ever Feel The Same, I Have Seen My Soul, Don’t You Say Maybe

Ensiferum is a band I wanted to see. Without being a fan of them, albums like “Victory Songs” and “One Man Army” had occasionally occupied my speakers (of which they played a total of…one song). But I cannot say that I enjoyed their show. And it was not about the way they played but because of the very bad sound. The guitars were buried and the drums were very high, to the point where you could hear the bass drum covering up almost everything.

The Finns had the drive, the energy, a lot of people who adore them and of course their characteristic choir vocals that give this special quality to their songs. Of course, there were those who did not like their music at all and to pass the time they started…dancing, every time the well-known folk melodies filled the air. Very nice moment when almost all of Fuzz shouted with them in the classic “Lai Lai Hei”. I repeat, it is a pity that they did not have the right sound for what they presented.

Setlist: Rum Women Victory, Andromeda, One More Magic Potion, Into Battle, For Sirens, Run From The Crushing Tide, Treacherous Gods, In My Sword I Trust, Lai Lai Hei, From Afar

And the big time has come for the super band from Sweden. Because such it is. Here, too, the sound wasn’t good during the first two songs as we could not hear the guitars, but it was fixed quickly and Dark Tranquillity left us with our jaws on the floor. “The Treason Wall”, “Monochromatic Stains”, “Terminus (Where Death Is Most Alive)” and most of us lost our shit just half hour into their show. Shortly afterwards, what followed showed the great love of the fans for the band as well as how important and special moments a live performance can give you. Mikael Stanne took a trip down to memory lane in order to talk about Fredrik Johansson, the band’s guitarist from 1993-1999, who died of cancer earlier this year. The emotion on his face was clear, that automatically the made the crowd to start a prolonged applause, shouting at the same time the name of Fredrik as well as the band’s, making Mikael very hard to hold his tears. The next song was dedicated to his memory, as it was the first they wrote together and it was none other than the titanic “Punish My Heaven”.

But that was not all. It was the band’s flawless performance, when in fact half of the musicians were session for the tour! What can I say about the great Mikael on vocals, the importance of Martin Brändström on keyboards and the amazing guitarist Johan Reinholdz who is only five years in the band but plays and behaves as if he is fifteen, singing almost every lyric? What if, after years of stability, there have been constant changes in their members lately? The Swedish machine does not gets affected by that. Joey Concepcion, who replaces his guitar teacher Chris Amott on this tour due to the fact that the latter recently became a father, may have had a milder presence on stage but he was impeccable. The rhythm section of Christian Jansson on bass and the beast Joakim Strandberg-Nilsson of the mighty In Mourning on drums did their job and more than that. And in all this you have the fans who helped with their voice in almost every track, singing many of the characteristic guitar melodies of the Swedes. Who also played two additional songs compared to the setlist they have on their tour because they really love us (many say it, few mean it). Bring them again and again. We will never get tired of seeing these gods. Because when you write songs like “ThereIn”, “Lost To Apathy” and “Misery’s Crown” among others, you are an ordinary man.

In conclusion, a great event that, as I said in the beginning, was on schedule (the extra time that the set of Dark Tranquillity lasted wasn’t that bad for anyone I guess). Three bands that gave their best on stage and a fourth one that is out of competition. The emotions that the music and the lyrics of the Swedes create, are unique, are special, are inexplicable. Very lucky to have seen so many times this great band in our country. We are the outstretched fingers that seize and hold the wind.