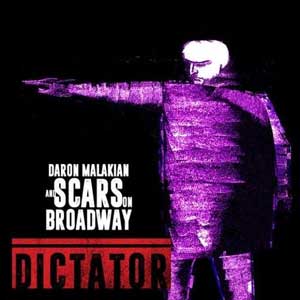 Scars On Broadway were founded when System Of A Down went on a hiatus in 2006. Daron Malakian and John Dolmayan got together again in this new band. After one album and many line-up changes, their second one has been finally released.

It took long enough of course, Daron recorded and produced it all by himself over a ten-day period in 2012. The reason is because things with SOAD were not very clear, so he didn’t want to release his own stuff. Not that they are now, plans for a new album don’t exist, so it was about time for some new music.

The differences between this and the amazing debut of 2008 are not that big, the most notable one is that this is actually a one-man project (maybe that’s why his name is in front of the band’s). This is actually music very close to SOAD, but without all the insanity. The lyrics are sometimes weird, sometimes quite caustic and the cover shows the orange lunatic that happens to govern one of the most powerful countries in the world, even if when the music was written he wasn’t the center of attention in the States.

There are no bad songs, personally I loved the amazing “Dictator”, “Guns Are Loaded” and “Till The End” and Daron’s choices for the two covers is really interesting. One is “Assimilate” from the Canadians Skinny Puppy, where he actually made it another song and the other is “Gie Mou” from the Greek singer Stamatis Kokotas. A song that Daron listened to it as a child because his uncle brought a lot of music from Greece and he chose to do an instrumental cover of it because he doesn’t know Greek

Well, “Dictator” is a really good album that is the closest one to SOAD that we can have. It should please their numerous fans if they ever decide to enter the studio.