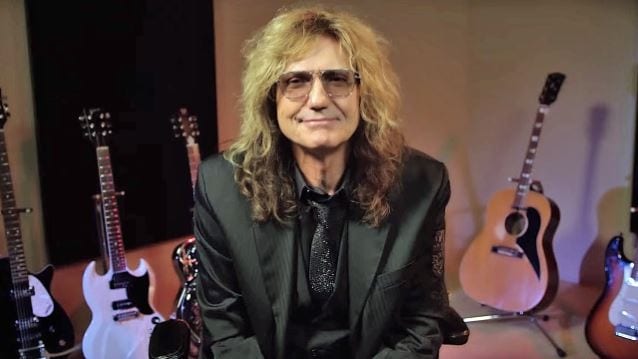 Former DEEP PURPLE and current WHITESNAKE frontman David Coverdale has dimissed reports that he is contemplating retiring in 2017 on the 30th anniversary of the release of one of the best-selling hard rock albums in history, WHITESNAKE’s “1987”.

Asked by Argentina’s Vorterix radio if there is any truth to rumors that he will call it quits after next year, Coverdale said : “Well, no. I made the mistake of saying to a friend of mine, a journalist, when I was mixing [WHITESNAKE’s] ‘The Purple Album’, my tribute to [my DEEP PURPLE bandmates] Ritchie [Blackmore] and Jon [Lord] and Ian [Paice] and Glenn [Hughes]. I thought, ‘Wow! This could be an interesting last project for me to finish as I started, ’cause the first time anybody ever heard of me was the [DEEP PURPLE] ‘Burn’ album. So it was kind of a foolish thing of me to say. Then we went on an incredibly successful fucking tour, which we’re finishing up editing, a DVD and a CD for spring [release] next year of ‘The Purple Tour’ experience. But, yeah, so I turned around to a friend of mine and said, ‘You know, this would be a great way for me to stop.’ I was very pleased with the album. And my co-producer, Michael, looked at me like I was fucking crazy. And then, of course, we had an amazingly successful tour last year. And then we started getting invited to come out this year. I think it was [WHITESNAKE guitarist] Reb Beach who said, ‘Why don’t we do a ‘greatest-hits’ tour? We’ve never done that.’ Which is why we’re doing songs [on the current WHITESNAKE tour] like ‘Judgement Day’, ‘Slow An’ Easy’, ‘Crying In The Rain’ — stuff we haven’t done for many years.“