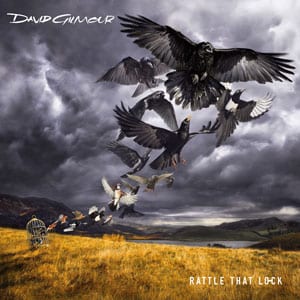 If Roger Waters is the reincarnation of the most popular time and the greatest moments of the gorgeous Pink Floyd’s grandeur, then David Gilmour can be considered as the one who keeps up the style and the feeling that this huge band radiated. Maybe “Rattle That Lock” doesn’t reach the level of “On An Island” but it brings back memories from ‘The Endless River” and by extension from “The Division Bell”.

Opening with “5 A.M.” which sounds like an unfinished introduction and closing with almost the same theme, “And Then…” includes moments which bear the stamp of David Gilmour and transmit to a large extent the trademark Pink Floyd feeling.

The title song stands out for its directness and I guess it was destined to be the first single of “Rattle That Lock” right from the start. “Faces Of Stone” stands out for its theatric character .The blues and jazz elements (not just touches) that we come across in many parts of the record are the ones that give a character and an identity which is always close to “On An Island”, “The Endless River” and “The Division Bell”.

“Polly Samson, Gilmour’s wife, is present in the lyric section while Gilmour himself along with Phil Manzanera worked on the production which has taken place in seven different studios.

You can easily recognize who made “Rattle That Lock” even before the introduction is over with all the good or bad things that this involves. In any case it’s a great release and another proof that big musicians never run out of ideas.