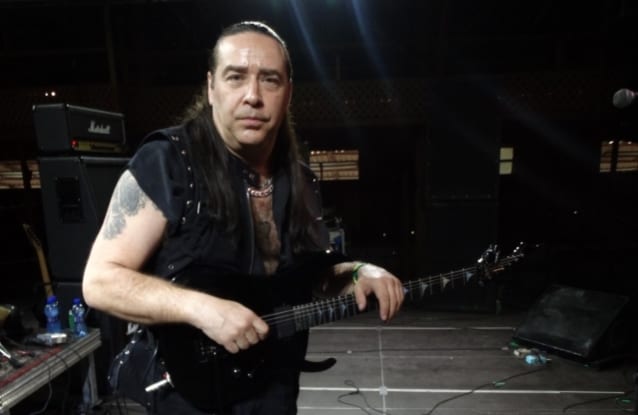 Former MANOWAR guitarist David Shankle says that he would be “happy” to return to the band in the wake of this week’s news that his replacement, Karl Logan, will not be touring with the group after being arrested on charges of possessing child pornography.
MANOWAR’s farewell tour, dubbed “The Final Battle”, is scheduled to resume in February 2019 in Tel Aviv, Israel before several dates in Russia and Eastern Europe, Scandinavia, Germany and a headlining appearance at France’s Hellfest.
On Friday, Shankle posted a lengthy statement on his Facebook page in which he revealed that he has composed the sequel to “The Triumph Of Steel’, the sole MANOWAR album he appeared on, and that he is recording these songs with a band called FEANOR. He also said that he has “always had the best relationship with Joey [DeMaio, MANOWAR bassist], Eric [Adams, MANOWAR singer] and all the other guys that I consider nothing less but brothers, so if duty calls my door, I will be happy to be present my weapons once again.”