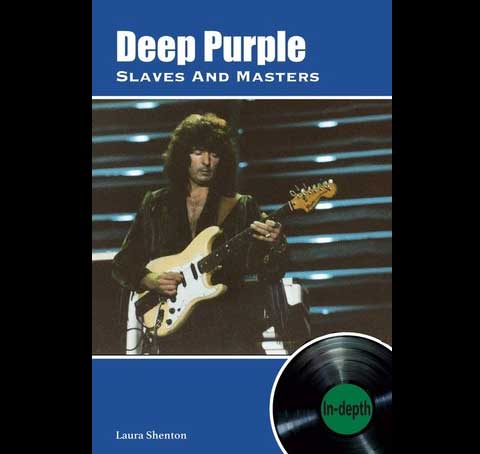 Wymer is a well-respected publishing company that specializes in rock books (and not only) with a greater emphasis on Deep Purple and all the related bands from the family tree. A relatively new yet fascinating series of books is labeled “in depth” and it focuses on one specific album penned by Laura Shenton. As one can easily gather, such books may be targeted towards a very specific bunch of readers but at the same they are absolutely essential for all those who want to learn details of a specific time-period of a band. The album in question this time around is “Slaves and Masters” by Deep Purple; an album that divided like no other before or since the fans of the band thus it has a wild beauty as we go down on this memory lane with Shenton’s immeasurable help.

Let’s start by the positive aspects of the book which quite honestly there are many; first of all, in this 100-page book we take a good look at the frame or the wider picture if you prefer that led to Joe Lynn Turner’s recruitment in a period where the band’s morale was at a low point due to the fact that they couldn’t find a suitable replacement for Ian Gillan. Shenton picks up from that point and deposits interviews, quotes and various comments from her archives that clarifies what went on during the writing, recording and touring of the album. And not only this, she tries to underline its importance in the overall legacy of Deep Purple. Naturally, she doesn’t fail to mention the well-documented criticism in regards with the style of the album and the…Deep Rainbow accusations in a text that flows naturally and makes you wanna read on and on without putting down the book.

Having said that, I’d have liked to see more details about the band’s time in the studio as all the Purple fans know that Jerry Bloom in particular has published in the past some great articles regarding “Slaves and Masters”. Also, I think that the overall structure of the contents was not cohesive enough and Shenton was repeating some words here and there. But that’s just a slight observation of mine. All in all, I would highly recommend the book to all the Deep Purple fans who want to know even more things about this criminally underrated record. We will be back with more book reviews of this excellent “in depth” series by Wymer. For those who want to purchase the book or learn more things about the series follow this link: https://www.wymeruk.co.uk/webshop/books/album-in-depth-series/deep-purple-slaves-and-masters-in-depth/