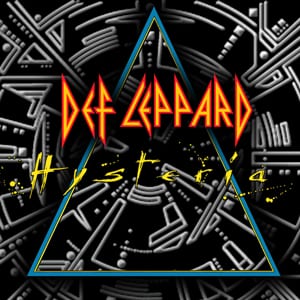 This was something that, more or less, we expected or suspected. After all, both Joe Elliott and Phil Collen had implied it in various interviews by stating that something big was in the making. So you didn’t have to be a rocket scientist to realize that this “big project” was nothing else than the 30th anniversary celebration of Def Leppard’s monumental album “Hysteria”. Naturally, Universal prepared a full arsenal of editions and the promotional tools were really really good for this release. Being myself a die hard fan of the band, I chose to buy the super deluxe edition although I must say that all the anniversary reissues were well-crafted and carefully manufactured.

From a positive standpoint, this box set is absolutely stunning! It includes 5 CDs, 2 DVDs, 4 books and a fold out big poster. All these are focused on (you guessed it…) “Hysteria”. Apart from the regular album, we are treated with all the b’sides and remixes plus for the first time ever on an official CD format the “In The Round In Your Face” live VHS tape. The 2 DVDs turn the spotlight over to the making of the album while all the video-clips and some TV appearances can be found in there, too. The 4 books are amazing and they take you right back to that era thanks to the sensational photo work by Ross Halfin and the detailed essay that includes lots of info.

On a negative aspect, I must say that we didn’t get any unreleased material whatsoever while it goes without saying that the core fan base was expecting stuff from the Steinman initial recordings (back in 1984). Joe Elliott was adamant that such recordings are non-existent…such a shame! We would have loved, also, to see for the first time on an official release the MTV documentary from 1988 but I guess the band couldn’t secure clearance for it.

Having said all that, the “Hysteria Super Deluxe Edition Box Set” is a great chance for us to have all the related material compiled in one edition and not getting into the process of retrieving all the CD singles out there. It might be an expensive package but trust us…it’s worth every penny of it and it is already becoming rare as it was released in limited quantities.