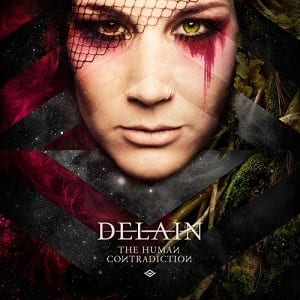 The Dutch keep on making big steps forward. “The Human Contradiction” is their fourth studio album and their reputation keeps on rising. After “We Are The Others” which made them famous, their new album comes to convince us of their talent and that they have much to offer in this kind of music at which very few can stand out. Their last tour with their “parents”, Within Temptation (which we presented recently), gives them an extra boost and the opportunity for thousands of people to meet with their talent since their performance was at least worthy of congratulations.

“The Human Contradiction” is a complete and mature album both compositionally and technically. It consists of nine excellent songs with “Stardust” standing out for its air play and its energy. The style of Delain’s new album isn’t much different from the previous ones. It has elements of symphonic power metal, however it could be generally considered as a mainstream album (compared to the kind of music they represent), an album that anyone can listen to.

The guest participations in “The Human Contradiction” are also notable. Marco Hietala (Nightwish), Alissa White-Gluz (the new singer of Arch Enemy), George Oosthoek (Orphanage) and other musicians accompany perfectly the band’ s inspirations, with Charlotte still being the first volin. No matter who is standing next to her, she’s amazing both in studio as well as in Delain’s concerts.

It’s an excellent album by the Dutch who are probably the most upcoming band in this kind of music and not only that. These guys have a very bright future.