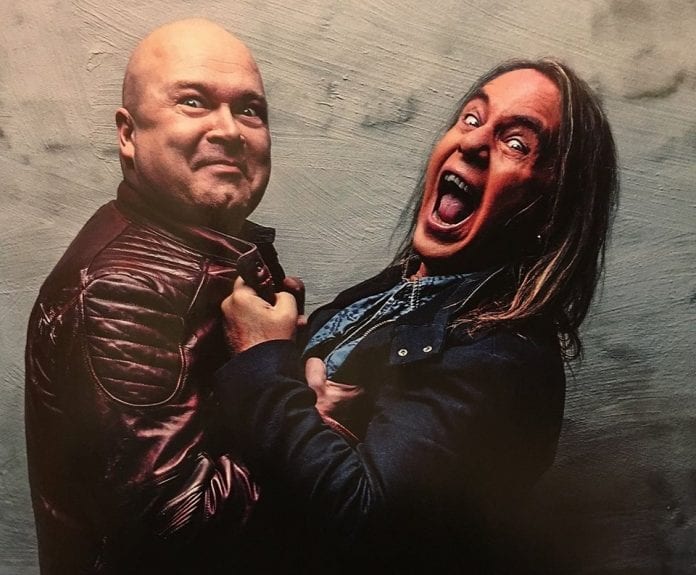 Tony Webster of the “Metal Command” radio show recently conducted an interview with frontman Andi Deris of German power metal legends HELLOWEEN about the band’s current “Pumpkins United” tour, which features former HELLOWEEN members Michael Kiske (vocals) and Kai Hansen (guitar, vocals) alongside Deris, guitarists Michael Weikath and Sascha Gerstner, bassist Markus Grosskopf and drummer Dani Löble.
On sharing the stage with Kiske, whom Deris originally replaced in 1994:
Andi: “First of all, he was visiting here for three weeks at the Canary Islands and I showed him around. We got very close. He’s a person who I really, really like. He’s a person you can talk with. He always has some interesting theme or subject to talk or discuss about. Even on tour, it’s very important because it’s never getting boring — you always have something to talk about. Being able to get to know that guy privately was very important because when we finally hit the stage, he was not a stranger to me anymore. I knew this could become a good friendship for the future and the next years, he will definitely be a part of my life, even in HELLOWEEN or not. I know sooner or later, he wants to buy a nice house over here in Tenerife Island, so he may become a neighbor. That’s probably the reason…you don’t need to act onstage. He’s a good friend of mine, which I never expected, to be honest. Yeah, that’s how life works. Suddenly, it shifts, whether you’ve been scared in the beginning. We had lots of talks. He was scared of me, I was scared of him. At the end of the day, it turned out that it fits, it fits very much.”