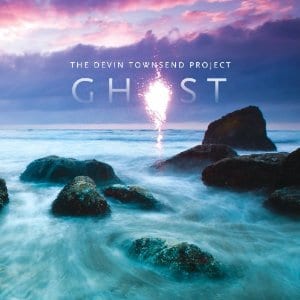 “Ghost” is the fourth and final album in the Devin Townsend Project quadrilogy which consists of the albums “Ki / Addicted / Deconstruction / Ghost”. The album was released along with “Deconstruction” and I think that Devin Townsend releases them together deliberately! Let me explain:

If “Deconstruction” is the heaviest and creepiest album the Canadian has released, “Ghost” is a diametrically opposed album. Relaxed, more clear and very beautiful, it’s characterized by ambient melodramatic sounds.

This is the album you’ll hear when you want to go to your happy place and relax. Devin Townsend on this album uses ethereal vocals, acoustic guitar, flute and “jazzy” drums. Certainly, the result is excellent and really relaxing.

The production of Devin Townsend gives great power to the compositions. Much thought has been given so that each track is a unique experience. The ambient sounds and the vocals by the Canadian and Katrina make “Ghost” a great album, although the compositions themselves are not especially great.

A disadvantage of the album is that it goes over 70 minutes in duration, which makes it difficult to listen as a whole especially when it has little variety. All 70 minutes are relaxing, calm and beautiful! There are songs like “Heart Baby” and “Feather” that show the strongest aspects of this side of the man’s work.

Eventually “Ghost” is a great album but the listener must be in a particular mood to appreciate it. It’s not the album that you get to listen in the car going to work. It needs great caution and perhaps trained ear..