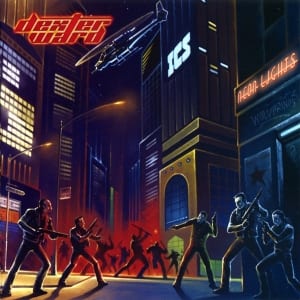 Debut album for the Greek band with the Italian singer, following their 2010 EP. Alright, let’s get to the point… Music mainly influenced by the 80’s, American Metal and the GREatest band of them all (yeah, I’m talking Maiden here), epical setup and galloping to the core. Blacking out is caused by double bass drumming during “Evil nightmares”; many tutti’s and fabulous craftsmanship over “Return of the Longships”. The band consists of some fantastic musicians, there are no boundaries, only pride and glory. I got into their myspace page and read they will appear in two festivals, in Denmark and Germany, come July and September respectively.
Dexter Ward epic mania is all over the album, vocals step on recipes we loved for years, yet one could notice the voice is Rockish… You can see it here and there, amongst the tracks; it’s a rather Accept-ic believer and a Panzer fan, whilst you’ll get to listen to plenty of NWOBHM throughout the attack.
Maaan, those choruses… “Blackout in L.A.” splashes out a mighty chorus, the Maidenish guitar in the background is so cool alongside these vocal melodies. Yep, the boys totally nailed it! Best of luck, gents!