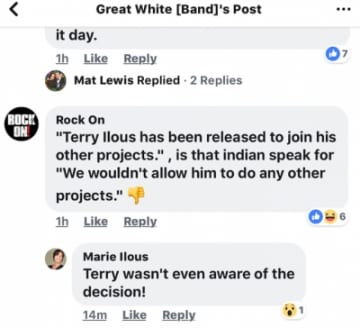 Lead vocalist Terry Ilous was apparently not aware that he was getting replaced as frontman for Great White as his wife Marie Ilous has indicated in a Facebook post and as first reported by Metal Sludge. In a rather sad state of affairs, Great White had seemingly already lined up a new singer (Mitch Malloy) when they announced via press release to Ilous that he had “been released.” Ilous‘ last gig with Great White was at the Cannery Hotel & Casino in North Las Vegas, Nevada, USA on July 8, 2018.
On July 7th in the morning, Ilous had made a video post on Facebook with the following heading “On our way to Las Vegas.” It does not appear that Ilous knew at that time that he would be getting released from the band.