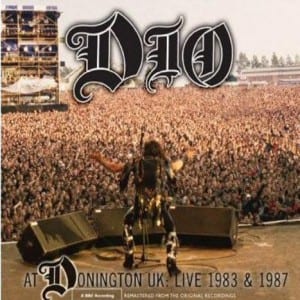 Many things have been said and written, by a lot of people – yours truly among them – about these releases regarding last year’s huge loss. I have been rather strict concerning most of them, some of those are even offensive to the memory of this grand artist. (I hope they won’t start the same now that Gary Moore is gone, too)
However, I will support this specific release. It is a very reliable sample of Dio’s live appearances in the 80’s and only a few videos were released back then, i.e. “Live In Concert” (1983, also on DVD today) and an E.P., “Intermission” (1986), the result of Sacred Heart Tour a year ago.
So here we are, featuring Dio’s two shows at the historical “Monsters Of Rock” festival in Donington in 1983 (Holy Diver Tour) and 1987 (Dream Evil Tour), one CD each, in the same package. That’s two shows forty-five minutes each, as the band was not headlining the festivals, two shows graphically demonstrating Dio’s live image. The sound is good enough, do not forget it’s a BBC production, and “real” enough.
You will also find a rather poor booklet and two backstage passes laminate reprints, one for each “Monsters Of Rock”.
I would suggest this double c.d. to all of us, especially the younger people who adored Ronnie James Dio. The older fans, we had experienced these concerts, thanks to those unbelievable vinyl bootlegs.