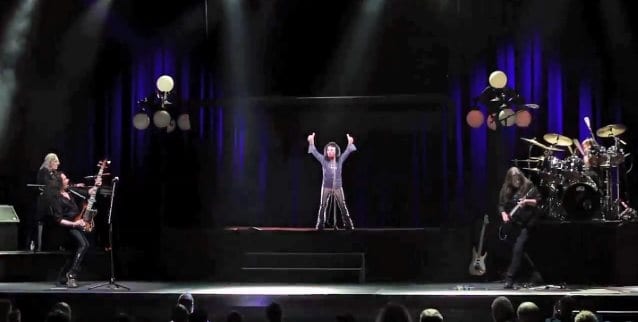 A hologram of the late Ronnie James Dio made its U.S. debut last month at the 28th annual Pollstar Awards at the The Novo (formerly Club Nokia) in Los Angeles, California. Created by Eyellusion, the appearance of the heavy metal icon took place during a performance by DIO DISCIPLES, which pays tribute to Ronnie and is fully supported by his widow/manager, Wendy.
The Dio hologram was first introduced at last year’s Wacken Open Air festival in Germany.
Jeff Pezzuti, CEO of Eyellusion, recently spoke to AXS.com about plans for a tour featuring the hologram, which will showcase various eras of the legendary metal singer’s career.
“The tour is currently being routed and we are hoping to make an announcement for an end of year kickoff in the coming months. This is not just about the U.S. It is truly a world tour. Ronnie’s fans are spread around the world and we intend to bring this exciting show to as many as we can. The show will not only feature Ronnie and his band but also live singers like Tim ‘Ripper’ Owens and others to complete the overall show vision. The show will feature effects and stage design that Ronnie made famous in the ’80s and will also incorporate new technology into what will be some pretty awesome special effects. It will be a fun experience for all ages, and a way to experience the incredible catalog [RAINBOW, BLACK SABBATH, DIO] that Ronnie made famous. We will feature both the expected songs, as well as some crowd favorites that will be surprises.“