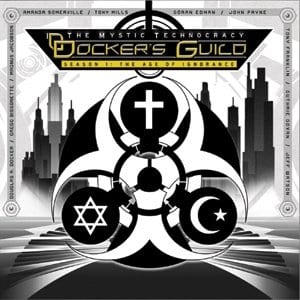 Douglas Docker, of French and American roots, grew up in Italy and soon found himself in love with music. He was second violinist in his Institute orchestra as well as a solo pianist. Soon he engages composition and continues with his classical studies. Since 1990 Rock is what he deals with mostly, he’s playing with a bunch of bands, he was in a number of bands for a long time now and wins a sound engineer scholarship. He then leaves for the States, for a new round of studies, graduates with honours and gets in another band, Biloxi. The band has a hit in Japan, however they split up soon; Douglas gets to meet many huge Rock musicians during his staying there.
He returns to Italy, plays some more bands, continues with his studies and then moves to France and the University of Sorbonne, to obtain another degree, in musicology this time. He travels the world; goes to Thailand to shoot a documentary and returns for another academic title in ethno-musicology…
As you can understand, Mr. Docker is a hyper-musician, a master amongst teachers, a very special sample of highly educated musicman. It’s this very man that decided to do an album based on one of his stories, based on a very familiar issue: religion. For more than 4.000 years man has done the worst to man, man has become a beast, the ultimate crime-machine, the definition of destroyer… And he’s done all that in the name of god! God or Allah or Jehovah or anybody else, you name it, it was just the means to do damage and loving it at the same time. Douglas took that story and spaced it, by making it a five “seasons” opera. This album is actually the first season, baring the subtitle “Season I: The age of ignorance” and it’s being performed by the creator himself (keyboards, vocals and narrations) as well as by the following musicians ONLY.
John Payne, Göran Edman, Tony Mills, Amanda Somerville, Guthrie Govan, Jeff Watson, Gregg Bissonette, Magnus Jacobson, Tony Franklin, Donald D. Docker. Wot? Losfer words? Yeah, I know, I’m looking for my pills, too… Okay! It’s all good, it’s all impressive but what lies beneath these mighty names?
Do you happen to like the Ayreon projects? Do you fancy ELP, YES and the rest of the huge Prog Masters, through an AOR prism? You do like that stuff, huh? Then you’ll have no problem at all. Put your headphones on, hit the lights and relax, you’re in for a treat! Safe travels!