I’ve not hidden my enthusiasm to see Dokken again, not for even one second. A “feeling band” for me as well as for many people getting their “musical manhood” back in the 80’s.

Knowing where the band stands today (surely they’re not in a uprising period – record productivity speaking) and the fact that they are great on stage, I was pretty optimistic that the particular night would be something special.

However, first of all, the almost 700 fans inside the venue should warm up with two Greek bands. The first ones to appear were “Wanted”. A band with potential, with a hard rock motive, with some problems, regarding the guitar, couldn’t hear it at first, yet with superb songs which attracted the audience. They played for 30 minutes, left very positive impression, with the slight exception of their not so good cover on Kiss “Shout It Out Loud”, however, there must be a continuance. Greek band Spitfire hit the stage then. The pioneers Greek Έλληνες hard rockers made an amazing appearance, they did remind to the older fans their “First Attack” album, their support appearance, along with Saxon in May, 1986 and a whole bunch of stuff, coming from the “poor 80s” for Greece, regarding the concerts.

Set list included most of the “First Attack” songs (Street Fighter, Lead Me On, Evil Thoughts Around, Whispers, Lady Of The Night), two songs from the “100% Live” album, the amazing “Fool Enough” and “Taste The Fire” and a brand new one, which will be included in the new album. Elia Logginidis was the well known lead/solo guitarist, Alexis was in superb shape, to his credit he mentioned the original lead vocalist, a really unlucky character, Dinos Kostakis, while Mark Cross did not need any references when it comes to master the drums, he was simply fabulous. I would like to make a special separate reference to Spitfire’s bassist, Costas Makricostas, an exceptional musician, a fine bass guitarist, with such a tremendous scene appearance. I’m sure that some tears showed up, after the 75 minutes show. A show which was a… threat for Dokken, coming up next.

It’s 23:35’ (we better get used to that… timing, for the sake of our own nerves). The Americans hit the stage in Greece for the very first time, with a… 20 years – almost – delay! If Don Dokken’s voice was not that “down” and the band showed a little more professionalism on stage, then we would have had the ultimate hard rock live! Since we can not do anything based on “if’s”, let’s review what the concert had and had not. Band performance, for starters, was fantastic, mainly because of the new guitarist, whom many intimidated, as he was called to fill the shoes of George Lynch, Reb Beach, John Norum.. Levin was indeed exceptional and, maybe, the best on stage. Don could have surely avoided some “lines” as well as his outfit, which he was taking good care of, once. Mick Brown was a regular “madhouse”, 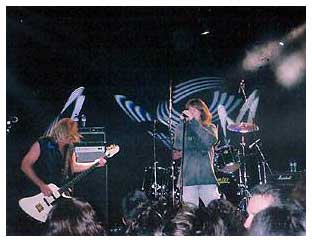 giving his own “color” to the show, with his background vocals and his Jack Daniels consumption! At some point, the “funny jokes” between Don and Mick was kinda out of control. As for Barry Sparks, he was more… [Dokken] formal, dealing with his… bass all the time. And he was splendid at that. Now, those of you, not present at the Gagarin venue, assumed that, based on what you just read, the concert was not that good, you’ve got another thing coming. Dokken was fantastic! The set list was 100% best of, and the band “binding” was simply ultimate! Don Dokken’s voice might have lost its original power (he’s over 50), but then again, Don has something you can’t find nowadays. He has the Dokken 80s feeling and his performance is ravishing, even dominating. The octaves might decrease but the color of the voice will not faint. I can not hide it. Sometimes I felt I was being “cut” by a sweet chill. Most of the songs we’ve heard came from the first period, except “Too High To Fly” and “Sunless Days”, from “Dysfunctional” and “Long Way Home” respectively.

I’m not sure whether Dokken satisfied their audience after a 90’ show, yet I’d love to see them again. It was one of the concerts I’ll never forget, mainly because feeling is “it” for some people, for some things. The first thought that popped into my mind, as I was leaving the venue, was the next Dokken concert, their unplugged session at the Underworld! For that review I must “switch” the mic, should I say the page, to my good colleague, Chris Stamelos… 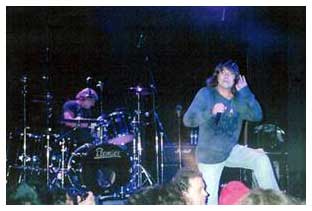 Set list: Unchain The Night, Into The Fire, Dream Warriors, Kiss Of Death, The Hunter, Breaking The Chains, Alone Again, Paris Is Burning, Too High To Fly, It’s Not Love, Just Got Lucky, Tooth And Nail, Sunless Days, In My Dreams