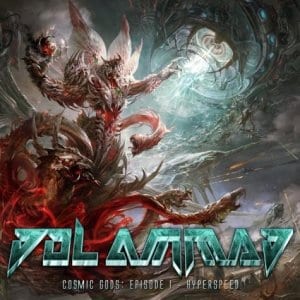 As soon as I saw the name of the band on the album sleeve I ran off to check my files. It’s Olympics year 2004 and Dol Ammad release their debut, “Star tales”… The man behind the group, the musician and his vision, the creator, the director of the show. Cuz it’s a regular show. When you’re composing music for a twelve-member choir, a choir singing all over the album, then direction becomes a necessity. Thanasis Lightbridge and his keyboards draw the lines and set the course and the singers step on the melody lines and act like a completely gifted choir. Dim is playing all those themes in the most shredding way and the twelve are responsible for the outstanding lyrics “pronunciation”. It would be naïve from our side not to mention all those tenors and bass, all those altos and sopranos, taking over to give that spacey dimension to the libretto. The spaceship is back and, this time, it’s faster, bigger, more brilliant… It’s an amazing album, it’s Vangelis, Jarre and Metal in the same package!
The first episode of the Cosmic gods is driving us bananas! It’s inspired, it’s a storm of magnificent ideas and keyboardphrenia and we already anticipate episode No 2. The album is released in vinyl, too. Best of luck, best of success!