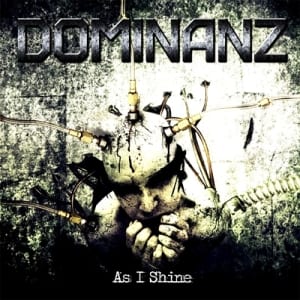 Dominanz comes to us from Norway and it a collaboration of artists well known in the black metal world. Roy Nordaas (ex-CULT OF DECEPTION)on bass, keys and vocals, Jørn Tunsberg (ex-Immortal, Old Funeral) on guitars and Frode Gaustad (ex-THY GRIEF) on drums. The resulting sound is not as black metal as you would assume.
“As I Shine” is the first release of the trio and they have composed a hybrid of atmospheric goth and industrial music with lots of black metal influences. The thing is that I doubt that an individual with a specific taste will like this album. The goth fans will find it too black, and the black metal fans will find it too soft. Nevertheless  this is not a bad album.
The 10 tracks of the album have an industrial feel similar to some of the Rammstein songs and also a resemblance to bands like Tiamat and Type O Negative. As you can understand it is really far from anything else the three musicians have ever done.
There is really good songwriting and some songs that can get you headband like “Infinity”, “Agony and Domination”, “The Philanthropic” and “The end of All is Here”. The production is really clear and it helps every single song. The synths and the backing female vocals complete a really great atmosphere.
Dominanz decided to go out from their earlier works and created a really great experimental album. While it will not please many fans this is not a bad album at all.