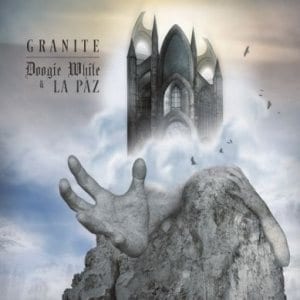 Gather around, boyz and galz, I gotta tell you a story. There was this kewl band once, called La Paz. Five Scotchmen joined forces almost twenty years ago (Eighteen? I’ll go with twenty, thank you!) and started jamming. They bind, they’re feeling GREat with it, hitting local stages and clubs, making the world notice them. Their style points at Rainbow – mainly – and bands the likes of Journey and Purple and more. They do make the difference, they get so close to close the deal and sign their first ever contract and… and it doesn’t work! Singer is leaving in 1988, moving to London to play in other bands and eventually ends up with… His Blackmoreness! That’s right, folks, Doogie White is “that singer”. All the rest is known to everybody. Doogs is playing with some of the GREatest acts in the world and touring with even more; story is getting lost inside oblivion cupboards and… and we think it’s that way till the ol’ bandmates decide to reunite.
There’s a “Since you been gone” climate all over the album, you’re gonna smile and sing along and even dance to it and feel pretty damn good about yourselves. Songs are coming from the 80’s, featuring White’s amazing voice dominating the speakers. There is not even one song lacking quality, every song in the album deserves to be loved. I’m just gonna mention “What do you say”, which also contains some Thin Lizzy elements, it’s really touching.
This is one band that will play some live shows here and there and that’s it. Yet, due to the fact that songs are bloody good and La Paz members are still good friends and due to the fact that this darn music is for you to enjoy it, along with your friends, raise your glasses and listen to these beautiful melodies. They’re totally worth it!