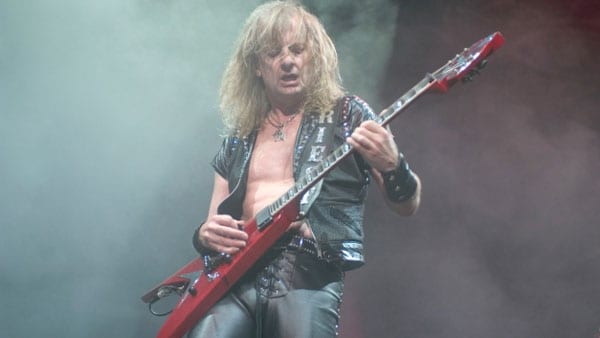 Former JUDAS PRIEST guitarist K.K. Downing says that he never meant to insinuate that producer Andy Sneap played Glenn Tipton’s guitar parts during the making of the band’s new album, “Firepower”.
Two weeks after Tipton announced that he was retiring from the road due to his battle with Parkinson’s disease, Downing released a statement in which he said that he was “shocked and stunned” that he wasn’t approached to rejoin the band and suggested that Sneap’s “contribution to the new JUDAS PRIEST album was much more than just as a producer.” His comments appeared to get a rise out of JUDAS PRIEST singer Rob Halford, who fired back that “a lot” of K.K.’s statement was “completely superfluous” and dismissed as “a thousand percent false” the idea that Tipton didn’t personally lay down all of his guitar work on “Firepower”.