Since Draconian are visiting Greece for the second time on February 14th, we take a chance to remember their best album. They come from Sweden and 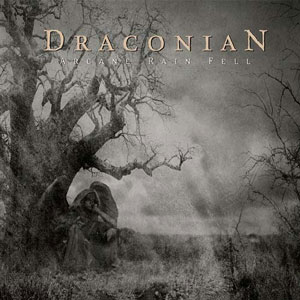 were founded back in 1994 by the name Kerberos. They were playing something entirely different from what we know, a style of melodic death metal with black metal influences, but all this was about to change some months later when their vocalist (and keyboardist until 1999) Anders Jacobsson joined the band. They changed their name and style and released several demos until their first full-length (“Where Lovers Mourn” – 2003). And so we arrive at 2005, when they release this masterpiece.

The amazing cover gives you an idea for what’s about to come, until the first drops of rain in the opening track “A Scenery Of Loss” set the mood before their music steps in. They call themselves gothic doom metal and there is not better description than that. The album goes on with the magical “Daylight Misery” and shows that these guys aren’t joking. Mournful tunes, excellent atmosphere, brutal vocals from their leader and beautiful clean from the enchanting voice of Lisa Johansson (sadly, she quit the band in 2011). No hope, no happy melodies, no light at the end of the tunnel.

If you listen in during the summer, the sun will disappear and everything around you will freeze. This is not the album that you will hear while you are doing the dishes, when you are on the bus, when you have your mind somewhere else. Listen to it under the right circumstances and you will love it. “Arcane Rain Fell” concludes with their best (maybe) song, the fantastic “Death, Come Near Me”. 15 minutes of perfection for a song that whatever I say about it, it won’t be enough. Draconian couldn’t release a better or even equal album than this. Maybe they didn’t want to. “Arcane Rain Fell” is one of the best atmospheric doom/death album of all times. So simple.

(the album was released in 2005 by Napalm Records)