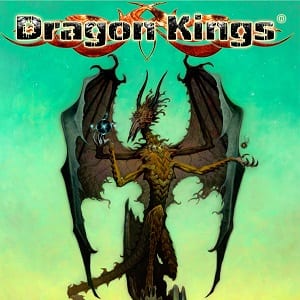 His tenure in Queensryche proved to be beneficial. Six years full of experiences at any level for a great already musician (underestimated though) isn’t bad.  He has made a lot of efforts, most of them really dignified. He has applied to many kinds of music from jazz to core and the only thing missing is to settle (fortunately or unfortunately) on a particular kind and his works to have the promotion they deserve.

Dragon Kings is his new project and something quite different from what we were used to so far. The same titled album is a concept and is about the adventures of a gladiator.

Musically, I would characterize it as a very contemporary epic progressive metal, with quite a modern orchestration. This is where the very old school cover refers to. It reminds a lot of N.W.O.B.H.M. There are a lot of good pieces in this album, some of them really complicated but without “missing” the composition. The guitars, modern or classic, are the prevalent element of this c.d and in many parts they are very close to the ones of “Operation:Mindcrime II” . Let’s not forget that he was one of its basic composers.

From this album I will single out the very melodic “The water Bringer”, the “Fly By The Night Sky” and the “Deep In The Hivelands”.They are all very good songs which, I believe, will impress some older metal fans.