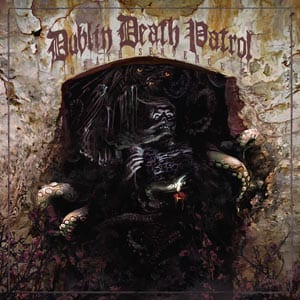 I am pretty certain that the majority of the thrash metal fans out there is surely aware of Dublin Death Patrol’s existence…this is, after all, the project (or maybe a steady band?) of non other than Chuck Billy and Steve Souza. So, as you can gather, this is Bay Area in all its beautiful and sparking glory as it’s not an everyday thing when two giants of the scene join forces for an album…right?
Truth be told here…when I listened to the debut album 4-5 years ago I wasn’t thrilled. I mean, I liked the album but I’d expected far more things from this thrash metal unison. Luckily, “Death Sentence” is far superior. The team of musicians (almost a dozen) strikes back and now the Bay Area elements are definitely in the forefront (in a more up to date production, of course). Almost subconsciously the songs bring in mind Testament and Exodus due to the vocals of Billy and Souza but basically “Death Sentence” is a modern, thrash album that at moments it finds itself in the close vicinity of the extreme brutal sound (eg. “Dehumanize”).
I believe that Dublin Death Patrol –what a thrash name, my God!- has to offer far more things than let’s say Exodus of the 21st century. You should definitely check them out…
Highlight: In Dublin Death Patrol we also find many relatives of Billy and Souza…in the immortal Anthrax words: keep it in the family!