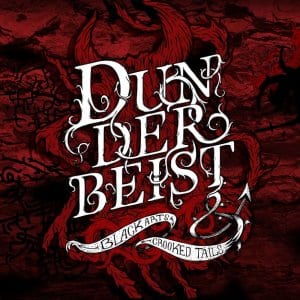 This band with the rather weird name, and the quite interesting musical approach, comes from the land of Viking. You wouldn’t call them as a stoner band, neither a metal band, nor sludge, and you certainly wouldn’t call them simplistic… so, what do you call them then? Don’t expect me to solve the “tagging” issue here, or simply tell you: “go find out for yourselves”.
Their sound is based on Rawk, that is currently becoming “trendy”, which is actually raw hard rock inspired by the brave ‘70s, and then you add layers of stoner, metal, psychedelia to make Dunderbeist. It’s no wonder that in their four-year long career in Norway’s music scene, they’ve established a big following that catches them when they play live, and they have a lot of fans that dress up like the band. They put on black make up around their eyes that is running on their faces (a tribute to Alice Cooper), white shirts and black suspenders.
For those of you that dig discovering new stuff, and new bands, then Dunderbeist is definitely for you. You have to admire the way they are using things we’ve heard before in a right, and even unpredictable way.