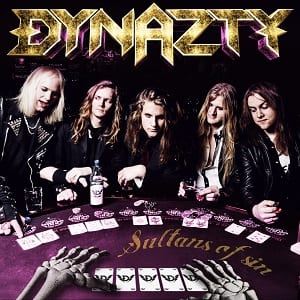 All these years, Sweden remains a force to be reckoned with when it comes down to measuring the overall quality of its musical outfits…I am sure that more or less everybody is aware of that fact. But, especially, in the past decade there have been spawned numerous remarkable hard rock groups that although they pay tribute to the 80s, at the same time they display a unique identity and sound. The names of Crashdiet, Hardcore Superstar and Crazy Lixx come almost instantly to mind.
If only I could share the same words of praise for Dynazty as this is a band that has never delivered something more than adequate, something that will make us go out and buy the product. It’s not like they come up with bad albums or something below par. But at the same time, their albums are simply OK…nothing more than this! “Sultans of Sin” is not an exception to the rule…it’s a mediocre effort of a band that tries hopelessly to sound like Gotthard or like a second-class hard rock band in the vein of Fair Warning and The Poodles.
The only standout moments is the track “Land of Broken Dreams”, a song which I learned that Dynazty aims to promote as its first single…a good choice, whatsoever, mates!
Highlight: An almost familiar album title, isn’t it?