Since we didn’t manage to do an interview with Eric Martensson in Wales (where we’d been there for the Hard Rock Hell Festival), we rearranged it via Skype and let me tell you that this was one of the most enjoyable interviews we’d done in all these years at Rockpages. Erik talked about –among other things- the new Eclipse album (“Armageddonize”), the latest Europe records, which was the record that made him pick up the guitar etc. Oh yes, he reassured all the Eclipse fans out there that they won’t have to wait four years for a new studio album by them. Interview: Sakis Nikas

Rockpages.gr: You have released a couple of months ago your brand new album “Armageddonize”. Who thought of the album title and isn’t it a little bit in contrast with the overall optimistic style of Eclipse? 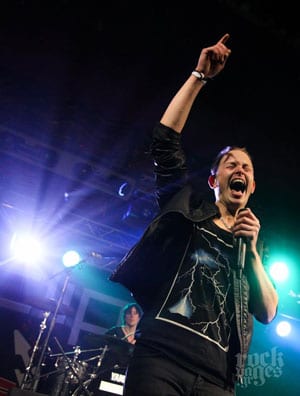 Erik Martensson: When you hear the album title you know it’s gonna be hard rock! You know what you’re gonna get when you buy the album. It’s a little bit harder but there’s no doubt that it’s a pure hard rock album.

Rockpages.gr: Personally, I believe that “Armageddonize” is the natural evolution of the excellent “Bleed and Scream” album although I believe that it is even more melodic which is a great thing, by the way. What do you think?

Erik Martensson: I agree…it’s a little bit more melodic. There was no master plan of having a more melodic album. We just wrote that kind of songs and we really wanted to compose songs that will stand the test of time. I think it’s important to have great melodies because that’s what defines a great song. 300 years from now you can enjoy the same song if it has a great melody. The melodies are very important to us…I don’t know if there are gonna be people who will listen to Eclipse in 300 years, though (laughs)!

Rockpages.gr: I believe you are the expert when it comes down to melodies as you have worked with such big names as Jeff Scott Soto, Giant, the late Jimi Jamison etc. Do you think that this collaboration has helped the quality of Eclipse as a collective unit?

Erik Martensson: No…I don’t think that we have become better musicians or a better band because of those other musicians but I still think that writing songs it’s like any other craft…it’s like being a carpenter. There is no difference to me. You have to work constantly so as to become better at your work and know exactly what a song needs. This is what I learn by producing other bands…to be able to compose and produce good songs that are perfect for the artist that I work with.

Rockpages.gr: Is it more difficult nowadays to be a professional musician or songwriter?

Erik Martensson: Of course! There is a huge difference in record sales. Hard rock music has been affected by the illegal downloading but on the other hand I entered the music scene…this genre when it was on its way down. So, I never worked during the glory days of the music business.

Rockpages.gr: We might not living in the glory days –from the sales standpoint- but there are so many young artists and great bands like Eclipse, H.e.a.t, Crazy Lixx…especially, all those bands from Scandinavia…

Erik Martensson: I totally agree with you. There are so many excellent bands…actually, I believe that there are better bands nowadays compared to the glory days of the genre. Hard rock is more alive now than has ever been before. Now you can see fans from the age of 10 up to 70! As you said, here in Sweden there are a lot of great melodic hard rock bands…so yeah, I agree with you. But in other genres, too…there are some great death metal bands here in Sweden.

Rockpages.gr: Speaking of the extreme music, I noticed that Markus was wearing a T’ shirt by Unleashed on stage…

Erik Martensson: Yeah. I did the mastering for their latest album.

Rockpages.gr: Do you listen to that kind of music?

Erik Martensson: Absolutely! I used to listen a lot to thrash metal…as a matter of fact, I still listen to thrash metal! I love everything from Death to Unleashed…Slayer, Metallica, Megadeth…I love all these bands. 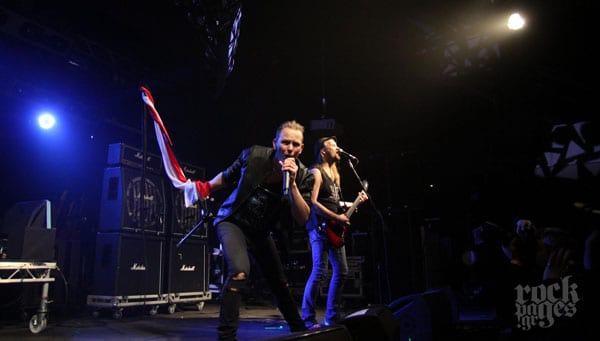 Rockpages.gr: Nice to hear that, Erik! Let’s get back, now, to “Armageddonize”. My favorite song on the album is “The Storm”. I know that this is a very personal song for you. Most songwriters tend to write ballads when it comes down to express their feelings for such sensitive matters. Instead, you preferred to write an up tempo song which has become already a classic Eclipse song. How do you feel about it when you sing it live on stage and people sing along to the song maybe without paying so much attention to the lyrical content?

Erik Martensson: I don’t really care about it…the only thing that matters to me is to see people having a great time! When they sing along to my songs, I couldn’t be a happier man. “The Storm” is a great live song and people really like it.

Rockpages.gr: Compared to your usual 4-year gap between studio albums, this one took only 2 ½ years…was it an easier process, this time, for you? 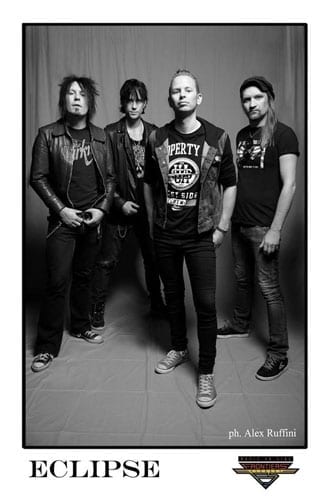 Erik Martensson: We used to release albums not so often because I was doing so many other things and I didn’t have so much time. I did three albums with W.E.T. and all this work with other artists…we decided that we should focus on Eclipse. It’s now or never! We are not getting younger so the next album is not gonna be released in four years. I believe that we will start writing new songs during the winter.

Rockpages.gr: The album cover could have easily been a vinyl cover (in a smaller size, of course). Did you want to show that the songs on this album have a classic, perhaps a more 80s feeling?

Erik Martensson: (laughs) Not really…we didn’t think much about it. It simply looked cool and it made the cover a little bit more alive…it’s a little bit more realistic. I grew up listening to vinyl albums. There is a certain feeling when you listen to vinyls. CDs are great, too…as a matter of fact, we released “Armageddonize” on vinyl.

Rockpages.gr: We went up to Wales for the Hard Rock Hell and when my chief editor asked me which the biggest surprise of the festival was for me, I said to him without any second thought “Eclipse”!

Erik Martensson: Wow! The show in Wales was great! There was no heat on stage and we were a little bit cold but that was OK (laughs). The festival, the music, the fans…everything was great!

Rockpages.gr: My only regret was not enjoying a full headlining show by you as the 60-minute set was not long enough for me…

Erik Martensson: I know what you mean…we are gonna do a European tour…mostly in Central Europe. But we will also be in Italy. Maybe you can catch us there.

Rockpages.gr: You told me in Wales that maybe you could add Greece to your schedule…

Erik Martensson: Yeah…we’ve been asked several times to play in Greece. It’s a really long drive and it isn’t always easy. But we really want to come to Greece.

Rockpages.gr: The first couple of Eclipse albums are really hard to find. Are there any plans of re-releasing them in the future?

Erik Martensson: No, we have no plans of re-releasing them. We own the rights of those records and we can easily reprint them at any time but we don’t wanna do that. The thing is that we all think, I mean the members of Eclipse, that those albums are not great. They are actually bad albums. We don’t wanna release them and new fans get a wrong impression of the band. It would be bad for us if someone see us live or listens to our last albums and then get those two records and spoil his impression of us. We don’t want people to say: “Oh Eclipse…I thought they were good but those albums are really bad”! I know that they are very expensive but if you wanna listen to them you can check the songs on YouTube or something.

Rockpages.gr: Is there any artist that you still haven’t worked with and you would love to do so in the near future?

Erik Martensson: Sure! There are at least 20 artists that I still want to work with (laughs).

Rockpages.gr: What’s the first name that comes to your mind?

Erik Martensson: Eric Martin! He is a fantastic singer. I’d love to produce a new Europe album…that would be great! I would give it some more…bite (laughs)!

Rockpages.gr: Maybe you could convince them to write in their old style…how about that?

Erik Martensson: Yeah, how about that (laughs)! Why the hell are they playing blues rock? Why Joey Tempest tries to sing like a blues singer? It’s unbelievable (laughs)!

Rockpages.gr: Maybe it has to do with John Norum who loves blues rock music…

Erik Martensson: Yeah…or maybe they are just tired of the old style of hard rock…who knows? They can do whatever they wanna do…if they are having a great time with that style of music…well, that’s all that matters. 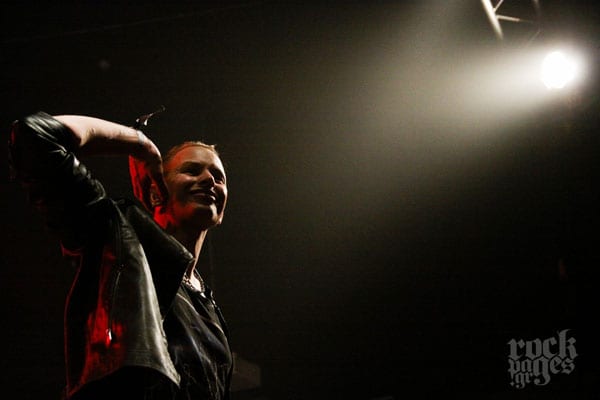 Rockpages.gr: What was the album that changed your life?

Erik Martensson: The album that made me wanna pick up a guitar was “Flick of the Switch” by AC/DC.

Rockpages.gr: Really? That was the first album that you bought or it just happened…?

Erik Martensson: No, I had several albums by then…I have an older brother and we used to go out and buy records together. We listened to all that great, classic stuff…W.A.S.P., KISS…then a friend of ours borrowed one of our albums…I think it was “Asylum” by KISS and he returned it with scratches and all that stuff. The album was in such a bad condition that we couldn’t listen to it and he decided to give us in return one album from his father’s collection an it was “Flick of the Switch”. When I listened to it, I said “wow”!!! The guitar playing on that album was unbelievable. That was the first time that the guitar sounded so great on a record…I couldn’t believe it.

Rockpages.gr: Have you ever been to Greece?

Erik Martensson: I’ve been to Crete when I was 8 year old.

Rockpages.gr: That was a long time ago…you should visit our country again…

Erik Martensson: Absolutely. I was discussing about cruising around the islands with the family but I also want to come to Greece and play with Eclipse, too.

Rockpages.gr: Do you know that the word “Eclipse” is actually a Greek word?

Erik Martensson: Yeah! It’s such an old word, isn’t it? Everybody knows this word all over the world. Eclipse is Eclipse…everywhere! 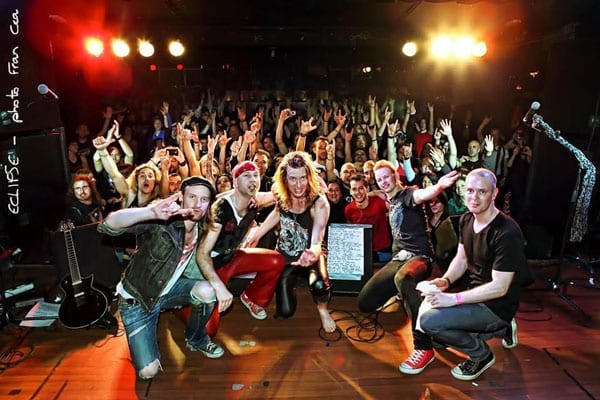