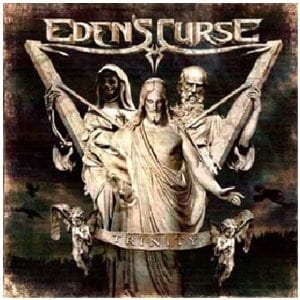 Since December 2009 and out lil’ talk with Michael Eden and Paul Logue about the new album title, I have been waiting… Waiting and waiting, till I got a hold of a copy. Their previous album, “The second coming”, was one of the very best ones that year and a gigantic drop of fresh melody. When reading about the people participating on the album and the guest appearances, same things you were reading at the news section here, I was wondering… “Could this one be better”? Practically, you can’t win perfection, yet these guys just did!
Eden’s voice is present and mighty again. That characteristic ironic color is running the show, as backvox remain AMAZING, giving it all over choruses. Songs are totally catchy and they instantly run thru you, possessing your whole existence, making you sing along. Plus, the production is IT! Wizard Dennis Ward (Krokus, Pink Cream 69, Angra) won the game once again! Boy, such productions can really spoil us… James LaBrie (Dream Theater) is singing with Mike in “No holy man” (first digital single); it’s a song featuring ferocious guitars and these two singers are creating a smashing chorus!
Dark “Can’t fool the devil” and multi-melodic “Rivers of destiny”, demonstrating a guitar crescendo, drive us all the way to Hammond-based “Dare to be different”; The multinational band is playing like a million bucks and it shows!
“Black Widow” and another duet, this time with Andi Deris (Helloween). Killer song, gallopy and barbaric, leading to a FINE chorus.
As we have been informed, album closes with a cover on Dio’s classic “Rock ‘N’ Roll Children” Well; I guess this third Cursed album will be our fav topic for a long time. Even longer than the previous album…