It’s an undisputed fact that there is a special bond between Enforcer and the Greek audience that was forged over the band’s several shows in our country and of course the icing to the cake was the live album “Live By Fire” which was recorded at Kyttaro in January 2013.

On the same venue last Saturday the favorite Swedes were playing one more show with Screamer and Monument (both making their live debut in Athens), as well as Greek bands Demolition Train and Nightbreed. Apolgies to the first two bands who won’t be reviewed on this article, we hope to catch them live next time. The schedule was running smooth, and unfortunately that’s we have to mention every time it happens in case we get used to it, with Monument fronted by our own Peter Ellis going on stage at around 8:30.

For the next half an hour Kyttaro surrended to their Maiden-ish metal and beyond with a great performer that fought from the very first second to win over the crowd and he finally succeeded. There were a lot of people who knew the band’s songs and sung along to “Carry On”, “Runawany”, “Crusaders” and “Fatal Attack”. It didn’t take long for the fists to fly in the air and with “Rock The Night” concluding the show the audience gave its “thumbs up” to Monument. See you soon! 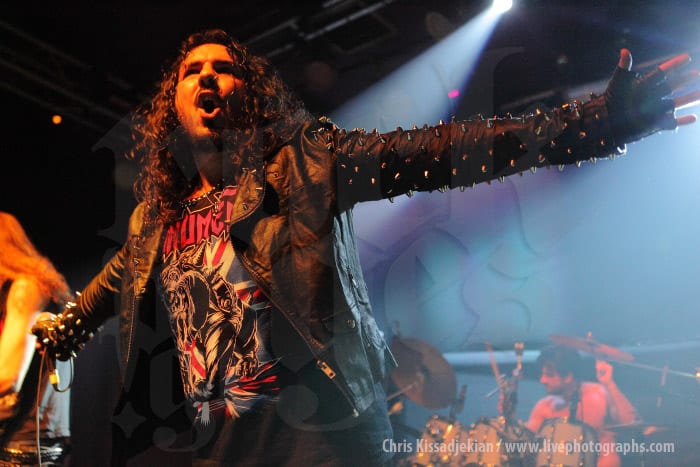 Next up were Swedes Screamer that I personally discovered a couple of months before the show and left me with the best of impressions with their old school metal which combines several rock’n’roll elements. What made me respect them even more was the Misfits patch and tatto on the bass player and guitarist respectively, as well as Manchester United’s logo on the back of one of their guitars. On stage Screamer were pretty good with lots of tricks picked up by the big book of Rock, like their KISS and Priest-like coordinated moves that always do the trick. Singer Anreas Wikstrom looked a bit in awe in the beggining but then felt at home and did a great job singing all the songs.

The absolute highlights of their performance were “Keep Walking” and “No Sleep Till Hamilton”, which is like listening to “Point Of Entry” era Judas Priest that made even Sakis Nikas come up with the conclusion “damn good song”, as well as Anton Fingal and Dejan Rosić dual guitar parts. The crowd that was cramming Kyttaro was pretty enthusiastic over the Swedes, which was something that gave them even more energy. Among others they played: : “On My Way”, “Can You Hear Me”, “Keep On Walking”, “Far Away From Home”, “No Sleep Till Hamilton”, “Phoenix”. 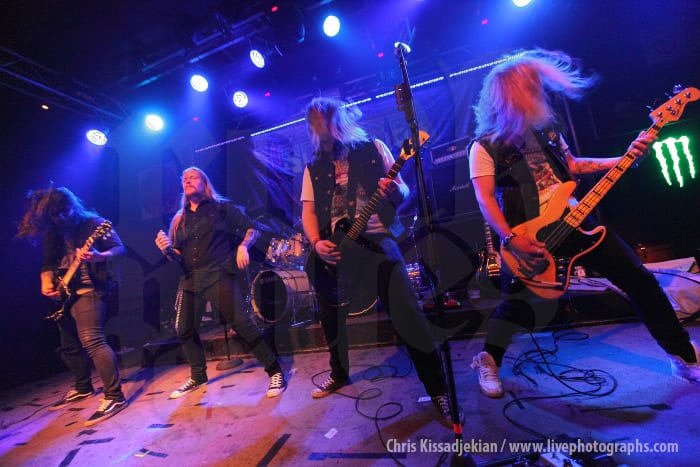 After a “false start” with the band finishing sound check with the lights out and everyone thinking that this was the beggining of the show, but it wasn’t, Enforcer put their foot on stage and the absolute heavy metal party kicked off. As mentioned earlier the relationship between the band and the Greeks is great and despite their often contact the crowd had overflowed the venue. With the very first notes there is a mayhem with crazed fans going on stage with the band and flying down to the audience (I really hope that the kid that spun into a 360 before landing is OK!). Needless to say that almost every soul in there knew the songs and was singing along the amazing Olof Wikstrand, that moshing was constant and that everybody is having a great time. Enforcer play like they are possessed running around the stage all the time without losing their contact with the crowd pointing out at fans, making gestures and inciting an even more intense participation to their show. 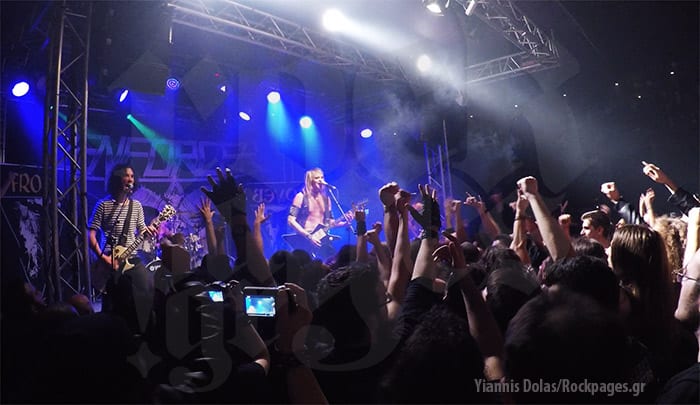 Olof’s delivery on vocals is impeccable despite the fact that he is not standing still, but he is running up and down on stage without even losing his breath. Of course, he throws the microphone to the audience since the atmosphere in Kyttaro is incredible with the moshpit not stopping for a second. You don’t have to be a rocket science to realize that these guys are hot, in great shape and in a career high, while they don’t forget to address to the crowd that supports them a lot several times and the truth is that when dudes like the guys in Enforcer say stuff like that it’s goes beyond that they don’t do it to kiss anybody’s ass!

On the other hand being “true” and underground may be several something to make fun about, or even mock and ridicule but undoubtedly there is a wonderful union among this society and the impact on younger metalheads that stand next to the seasoned veterans is remarkable. The “fire” is spreading on a scene that is always energetic and of course that’s something that everyone helps on its own way and this shouldn’t go unnoticed because especially nowadays support is valuable.

One of the last gigs of the year will have to be included in the “best of” lists, while the audience deserve its own kudos for its mosphpit and crowd surfing performance, as well as devotion which translates into knowing the songs, the albums and banging your head on “Katana”! In general, in a country that lives through some of the toughest times in its modern history some moments like this show gives strength and courage.

PS.: and because sometimes words are not enough to describe check out the videos below, especially where Olof gives his guitar to the crowd and…
Destroyer, Undying Evil, Mesmerized By Fire, Live For The Night, From Beyond, Hell With Follow, Death Rides This Night, Scream Of The Savage, Below The Slumber, Drum Solo, Run For Your Life, Mask Of The Red Death

Katana, Evil Attacker, Take Me Out Of This Nightmare (VIDEO), Midnight Vice