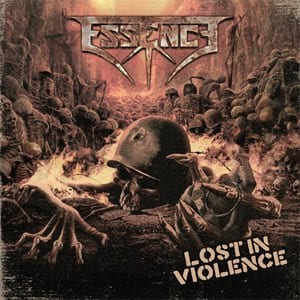 A short while ago, I wrote in one review of mine that the first exceptional release of 2011 was “Time is Up” by the American old-school thrashers Havok. Well, now comes the time for yet another sensational (and much superior, I must add) album from the Danish thrash outfit of Essence. “Lost in Violence” is the first full-length album by this young quartet and I dare to say that Essence had come up with a more qualitative bunch of songs compared to all the pioneers of the genre that released albums this year.
Those Danish will be the first to admit their admiration and passion for such bands as Destruction and Sodom with the war theme and the “in your face” guitar attack being the prominent features of the album. But, Essence seems not satisfied at all with only this arsenal but it chooses to enrich its sound with various instrumentation (eg. sitar) and dwell into a mid-tempo rhythm in a couple of songs with a pretty impressive result!
All in all, “Lost in Violence” is an album with one foot proudly standing in the past and the other making the first bold move towards the future…and, man, this looks promising and really hopeful!
Highlight: The overall artistic approach of the booklet and the well-written lyrics.