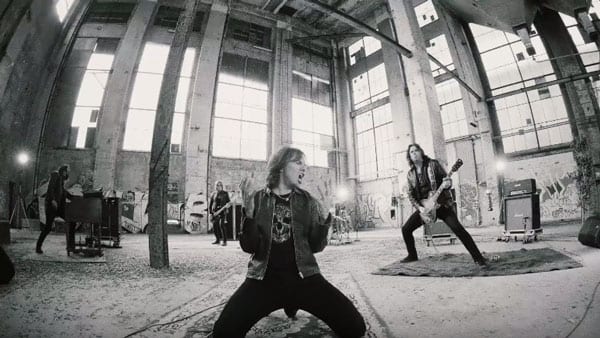 Europe published a new video for the song “Walk The Earth” from their same titled album, which will be out by the band’s company “Hell & Back” on October 20th. The video was directed by Patrick Ullaeus. The album was recorded at the historical Abbey Road Studios in London with producer Dave Cobb. “We’re simply a different band today,” says lead singer Joey Tempest. “Ever since we started up again in 2004, we have constantly explored our limits and new parts of our musical universe. After around a thousand shows, we feel comfortable just improvising, jamming and pushing our lyrics and songwriting with much more ease. “We have now been together recording and making albums longer than the early period of the band. Five albums in the ’80s and ’90s. Now six records with ‘Walk The Earth’. “When we started up again in 2004, we all agreed to think ‘long term,’ to take the long road and build up a new relationship with listeners and media. We all agreed on writing together, owning our music, and license it out to labels that really care and support us in the long run. We also agreed to not look back! And never stop looking for that deeper expression. “We don’t have much in common with our contemporaries from back then. We have taken a different path, making sure we are constantly moving forward. We have little regard for outside influences and opinions. In order to enjoy this new journey and feel creative, it needed to be completely on our terms.

“In a EUROPE live show, there is, of course, some room for nostalgia, but in the studio there is none. Every album is a reaction to the one before, a new journey a new adventure. “The music of a rock band needs to constantly move, challenge, upheave, evolve or the band will automatically become a nostalgia act. “We are proud of our past and previous albums, but we simply can’t identify, recapture, emulate any of it. We simply can’t write like that, even if we wanted to. We are a new act with a different expression.

“Over the years, we have learned how important recording techniques and recording equipment is by trying to search and research which producers, engineers and recording studios that can actually inspire and keep us wanting to be adventurous and daring. It has now taken us six albums to get here.”

“We were in the studio a few days into recording and Dave comes in wearing this very cool t-shirt with one of Mike’s designs on it,” Joey states. “Immediately we knew we had to check Mike’s other work and have him come up with an exclusive design for us based on the vibe of the album. We are very proud to have his amazing artwork as the ‘Walk The Earth’ album cover!”