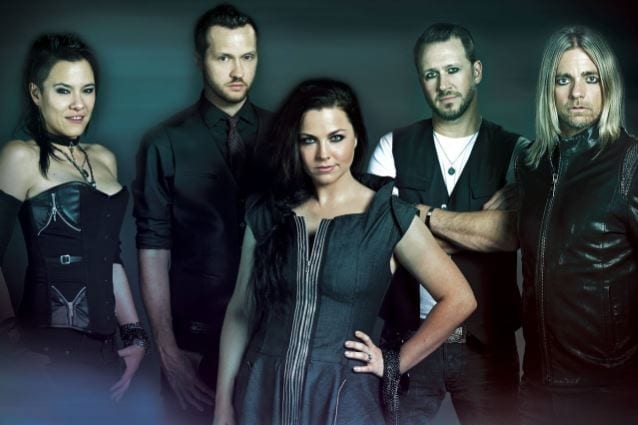 EVANESCENCE frontwoman Amy Lee has finally revealed the details of the unique project which the band has been working on for the past few months. Due this fall, the album, titled “Synthesis”, will be called that “because it is a synthesis — the combination, the contrast, the synergy between the organic and the synthetic, and also the past and the present,” the singer said in a video message announcing the record.
According to Amy, “Synthesis” will be different from all previous EVANESCENCE albums in that it will be “about orchestra and electronica. We’re taking our music, stripping out the big distorted guitars, stripping out the rock drums and replacing it with full orchestration in a completely synthetic world of beats and sounds. We’ve gone through our entire catalog of music and picked out the songs that are made to be heard in this way, and we’re sewing them together from the ground up,” she explained.
Clarifying that “Synthesis” is not a collection of remixed versions of existing EVANESCENCE songs, Amy said that the album’s creation involved rebuilding the material “from the ground up, with different tempos, with different parts, with intros and outros and segues and new pieces, and putting this all together like one big piece of music, like one big classical piece, or sort of like a soundtrack. Actually, in a lot of ways, it sounds a lot like the soundtrack of my life. [Laughs]”
In addition to reworked versions of EVANESCENCE songs that fans will already be familiar with, “Synthesis” will contain “two completely new and original compositions as well.” Amy added: “We’re collaborating on this with the legendary David Campbell, who arranged the strings for all three of our albums. This time he’s come to the table with way more — full orchestra, meaning wood winds and brass and strings and harp and just the whole thing. It’s really awesome.”