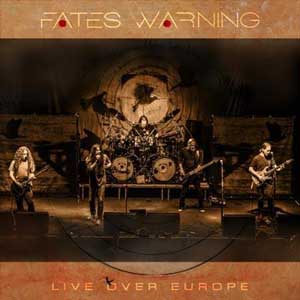 I am sure everybody remembers the shows or read reviews of the last Fates Warning European tour. After all, Fates Warning is a band that always delivers the goods and the second leg for the promotion of the magnificent latest studio effort “Theories of Flight” was not an exception to the rule. So, this double live album is the perfect souvenir for all of us who wants to relive those moments in (prog) time.

In “Live Over Europe” we are treated with the exact set list that we witnessed in January. Actually there is not even an alteration in the track sequence (not that we needed any) and all the songs are cued from various European cities thus we get a wide and varied picture of that aforementioned tour. Naturally the sound is flawless and the songs cover the entire Alder period; as a matter of fact the great singer is doing a phenomenal job behind the mic and his overall performance is brilliant. I must congratulate the guys on their decision to present many tracks from their two latest studio albums because it’s not rare to see bands avoid playing the new songs in favor of their well-known hits. Mind you, it’s not an easy task…

This is yet another perfect record by fates Warning; a band that has never disappointed me with any release so far. Let’s hope that Matheos and Co. will come up really soon with another studio album. We are insatiable or what?