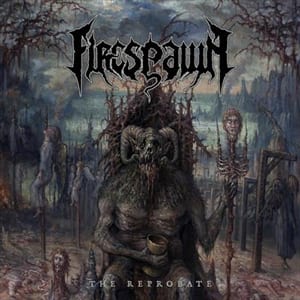 Meaningless prologue filled with excitement: I don’t know what’s going on with 2017, but it seems that there is an outburst of new albums by many known bands in the generic death metal scene. Either classic bands or new ones with veteran musicians have released or will release albums until July. Some of them are Beheaded, Benighted, Ex Deo, Immolation, Sinister, Six Feet Under, Evocation, Lock Up, Obituary, Nightrage, Hour Of Penance, God Dethroned, Hate, Vallenfyre, Suffocation, Dying Fetus, Decapitated, Memorial, Cut Up, Disbelief and Wolfheart. And we’re not even in the middle of this year. Amazing!

Moving on, Firespawn have just released a killer album. With members from Entombed A.D., Necrophobic and Unleashed they know pretty damn well how to play this music. It’s only two years after their debut album so we can understand that this is not another project but a full-time band. And compared to “Shadow Realms”, their evolution is obvious. The members have passed more time in order to learn each other better and the songs are new and not ideas that have been left in a drawer for years. “The Reprobate” is as a Swedish death metal album should be. Violent, morbid, evil and ugly. The music kicks ass and L-G Petrov is roaring like there is no tomorrow. It also has a great sound and a sick cover that completes ideally the release.

Firespawn are here to stay. “The Reprobate” will surely be played loud from many fans of this music. One of the best death metal albums of the year (even if we’re not even near the end of it).

For The Fans Of: Entombed, Bloodbath, Grave