Kai Hansen welcomes us on Gamma Ray’s tour bus a couple of hours before the band’s show in Athens. Mind you, this is not yet another tour for the Rays as they are on the road once again with Helloween. Smiling, in good spirits (despite a bronchitis that bags him) and as polite as ever, Kai Hansen has no problem whatsoever to answer all our questions…well, he did faced one slight problem in answering one, as you will read and see. At the same time, our cameraman, Mr. Dolas, is trying his best to capture the moment in the narrow space of the bus corridor! 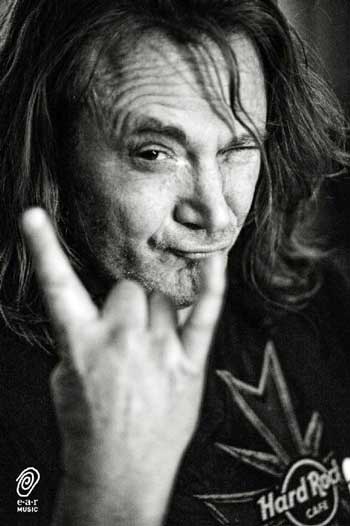 Kai Hansen: Many questions…first of all, we started working on the new album when I was kinda done with the Unisonic stuff and then after a while we got together, put ideas on the table, rehearsed, played…it went pretty good but we realized that it would be impossible to finish a whole album before the tour because…well…there was no way to make it otherwise it should have been ready in December with a complete production. So, we said at least…because the songwriting did go pretty well with the whole band…we said we didn’t want to go on tour “naked”. So we said: “let’s record and as soon as we have 5-6 songs ready, finish 2 of them, put them on an EP”…but of course two songs are not enough to really release something so we still had a cover track with Daniel (Zimmermann) on the drums that we haven’t released, “Lost Angels”…we did another one…we chose “Death or Glory”…I dag out my old Holocaust album and I had it in my car and it somehow stuck; (I thought) it would be cool for us to do. So we did that and of course we included the 6 tracks from the Bochum live recordings. The “Skeletons” thing is still…it’s not old yet. In the end we had something to go on tour with; something to give the people kind of an impression of what Gamma Ray sounds now with our new drummer and in what direction the new thing might be going.

Rockpages.gr: The new Gamma Ray album is also ready and it will soon be released. It will be called “Empire of the Undead”. What can we expect from it? Will it be in the typical Gamma Ray style?

Kai Hansen: Well, that’s very hard to say because what’s actually the typical Gamma Ray style…? I mean, we have the typical Gamma Ray style…it happens when we start playing but if you compare all the albums they all sound different to each other. There’s always some different aspect or some different kind of vibe on every album and I think with the new it will be kind of the same…so it’s very hard to predict but in general we are heading towards a straight heavy metal album…you know something that is melodic, powerful; a lot of fast stuff actually because personally I leave out a lot of my hard rock side in Unisonic so I am aiming for something that is more thrashy in some way. Then, of course, we take it from there. We start the production and see what comes up. (When) there’s one song…like a basic theme; I was thinking that it’s always nice to have…not a real concept…some kind of theme that goes through the whole album. It makes things more focused somehow. It’s more or less kind of an inspiration that comes…you know, all those ghost stories comics…“Tales From The Crypt” and stuff. I started reading (it) and I thought that this is pretty cool (laughs). There are so many cool horror stories and it’s not dead serious. If you want to make it dead serious you can transfer it to real life; people walking around with their i-phones, with their computers, with their i-pads, you know…whatever technical gadgets and not taking part in the real (world). You see people sitting at a café; six people at the same table and everybody’s doing this (Ed.Note: Kai Hansen imitating people typing words on a computer). They look kind of techno zombies to me. So, that’s our “Empire of the Undead”. They are living but they are dead. That’s the social criticism aspect that you could imply if you want to but you don’t have. You can just take it as a horror story thing.

Rockpages.gr: Before “Master of Confusion” you released the live album “Skeletons and Majesties”. How did it feel to be playing those obscure Gamma Ray tracks?

Kai Hansen: It felt good actually because for us it was a welcome change to the normal routine. We’ve been trying for these live concerts to include some of them and not go back to the “usual suspects” like “Rebellion In Dreamland” even though it may be missed by some people but on the other hand we don’t want to get too boring to ourselves and to our fans that (might) say: “they are always playing the same songs again”. So, for that reason it was very very good and we rediscover the potential of the older songs that were not on the “#1 hit list” for the fans or for us. There are still many more. It was a good experience.

Rockpages.gr: Looking back at the concert, was it hard for you to see Dan (Zimmermann) playing for the last time with the band after 15 years in the band?

Kai Hansen: Definitely when he opened up himself and said that he had lost the fire, the will to do this thing completely with full heart…I mean it was an honest thing but on the other hand it was like falling into a hole because this thing was so stable and suddenly it was…well, it was like your spouse telling you that she doesn’t love you anymore (laughs)! I got a kick out of Unisonic but on the other hand it was unwelcome at that time because it made the others…oh no, Kai’s gone, Daniel’s gone and Gamma Ray started to fall apart. I assured them I won’t let that happen. We didn’t fell like announcing auditions or searching for a drummer. We just let things lying in case there was a trace of Daniel you know coming back or something like that. But in the end we are very happy with how things are right now. 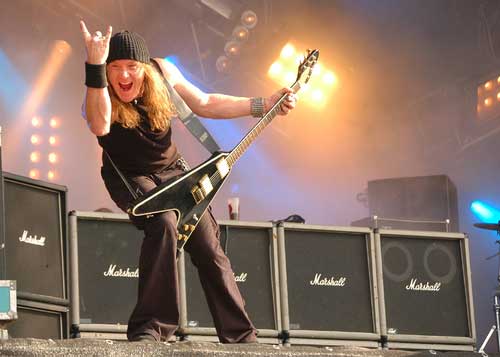 Rockpages.gr: “Land of the Free”…you mentioned earlier “Rebellion In Dreamland” as one of the most well-known songs of the Gamma Ray back catalogue. “Land of the Free” is a milestone record…I am sure you know that….everybody says that. Was it really the first time that you felt confident as a songwriter or a band leader since your departure from Helloween?

Kai Hansen: Not really…no. We were confident all the time in some way but this thing felt different. I think because…“Heading For Tomorrow” was a solo project…put it that way. I tried to take it as a band but of course it couldn’t be. “Sigh No More” was a try to work as a band and of course it was (us) trying to get away from the Helloween roots as well and not to be always in comparison with…trying to do something different. “Insanity and Genius” was a total allowance to any direction. It’s still a great album, I think…but we were kinda torn in between the worlds, you know…then “Land of the Free” was maybe the first thing where (it) was easy for me to focus on my trademarks or whatever you want to call it and as well as the others really taking part in it and adding to that. So, maybe that made the album good. And of course, there was a time of confusion where…(everybody said) power metal, melodic metal is uncool or whatever. Things that going on with grunge and all that shit…so, at that point we said “fuck that all…fuck what people think. We will do whatever feels good”! If you just loose these chains and break away from these restrictions in the music scene where you are glued in playing double bass drums or whatever…we said: “fuck that, we like it…so we did it”! That was a kind of confidence that I didn’t have before in that way. I don’t know…it just happened. Of course, for me it was a thing…taking over the vocals; it was maybe adding up to the fact that things were more intimate or personal. Ralf is a great singer but he was kind of trying to sing what I felt and now I was singing (what I felt) myself. It was more direct.

Rockpages.gr: That’s why I used the word “confident” because that was the first time since “Walls of Jericho” that you were singing lead (vocals) on an album… 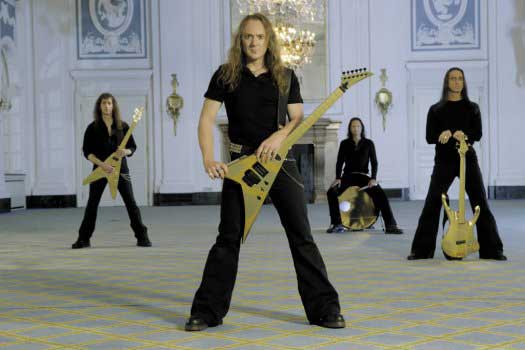 Kai Hansen: I was literally shitting my pants (laughs). It was a big heritage to live with, you know. But for some reason I felt I could do it. 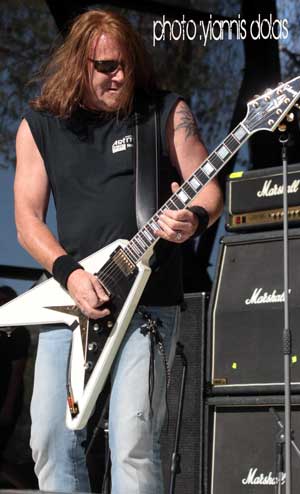 Rockpages.gr: You are once again touring with Helloween. I am sure you realize that every power metal fan is having the time of his life. When you were a kid, which was the concert that you were eagerly awaiting to go to, to see…?

Kai Hansen: Well, definitely my NWOBHM heroes, Judas Priest and Iron Maiden in one show…that was pretty amazing. And then the big shows in Germany with Scorpions, Accept…what else was there…so many cool bands all together in one bill. It was great.

Rockpages.gr: You have done lots of covers from such bands as Holocaust, Judas Priest, Uriah Heep and others. If you had to choose three bands to cover three Gamma Ray songs which ones will those be?

Kai Hansen: Oh shit! That’s a pretty tough thing. Now I have to think a little bit… (after a while)…pretty tough (laughs). I never thought about that actually.

Rockpages.gr: Not even one band…?

Kai Hansen: When it happens and one band is covering our song…of course, I am listening and sometimes I find some good stuff.  I think there was a version of “How Many Tears” of a Black Metal band called Graveworm that was very interesting. Stuff like that…it is of course appealing.

Rockpages.gr: We’ll make it easier: if Rob Halford or Glenn Tipton comes to you and say: “OK, Kai…we wanna do a Gama Ray song”. Which one would fit in the Judas Priest style?

Kai Hansen: “Men, Martians and Machines” that would be one song that would fit Rob very well.

Rockpages.gr: I will say a name and you will say the first word or phrase that come to your mind… 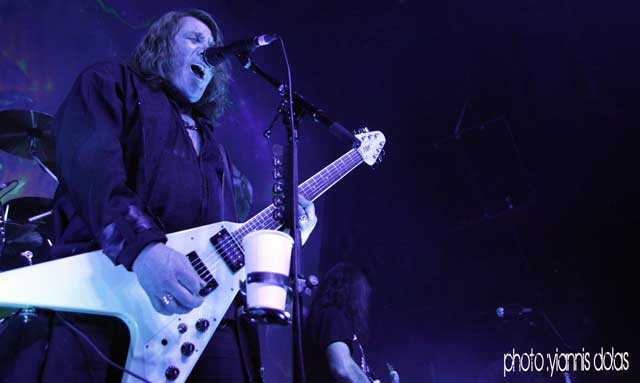