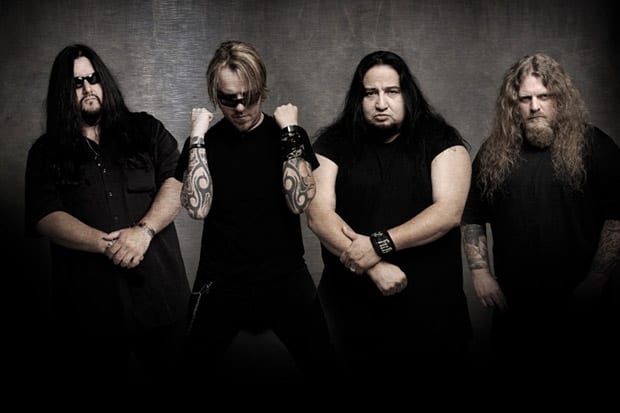 …he was no longer needed in Fear Factory.  Arto Lehtinen of Metal-Rules.com recently conducted an interview with legendary extreme-metal drummer Gene Hoglan (TESTAMENT, DEATH,STRAPPING YOUNG LAD, DARK ANGEL, DETHKLOK). A couple of excerpts from the chat follow below.Metal-Rules.com: How about the FEAR FACTORY thing? It’s completely done by you now?

Hoglan: Yeah. They made some choices, and I wasn’t a part of their choices, so it was like, “OK. You’ve got the human drum machine playing for you, but you’re going to [record an album] with a drum machine? OK. Bye.” Like I was saying earlier, it’s, like, I go where it’s fun, and if it’s fun, and I’m valued, and I feel like part of the team, great. And apparently I was so not even part of the team that I wasn’t even told that “Oh, yeah, we recorded the record with the drum machine.” I was waiting for a schedule; like, seriously, I waited. Waiting for, like, “Hey, when do you guys want to go to the studio?” Like, “Hey, I’m booked, I’m trying to get in touch with you guys to block time out.” Everybody’s asking me to come play on this project — “Come do this over here. When are you guys going to go in the studio?” — and they are, like, “Oh, we will let you know.” Then I read on Blabbermouth the album is done, I’m, like, “OK, well, so am I. So you made your choice. Bye.”