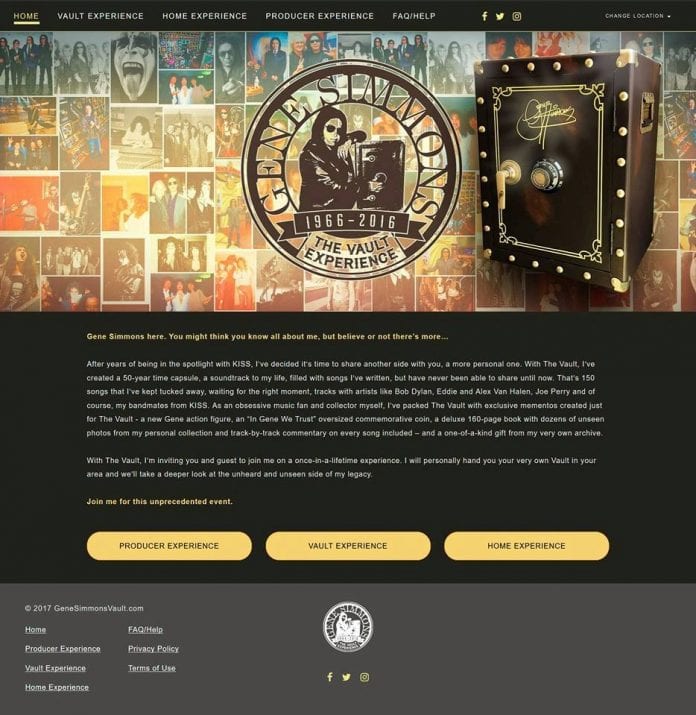 Gene Simmons’s long-promised box set of previously unreleased solo material, which has apparently had several different working titles over the years — including “Monster” (later used by KISS for the band’s most recent studio album), “Alter Ego” and “100” — will finally see the light of day later this year.
In a newly released video message, the KISS bassist/vocalist states: “For the past three years, I’ve been working on something that I’ve wanted to share with you my entire life. I’ve gone through hours and hours of music I’ve recorded and written over the past fifty years to craft my career-spanning solo recordings box set. It’s called ‘The Vault’.”
He continues: “‘The Vault’ is one hundred and fifty-plus never-before-released songs I’ve written, spanning fifty years, going all the way back to when I was fourteen years old, all the way to some of the songs that became KISS classics. Tens CDs right here, all inside ‘The Vault’. It’s finally ready to bring to you. Yeah, that’s right, I said ‘to bring to you,’ because what I’m gonna be doing is something that’s never been done before by any artist or band. I’m gonna hand-deliver ‘The Vault’ box set to you and to fans like you around the world.”
Simmons adds: “I also wanted you to have really cool stuff: an exclusive Gene Simmons action figure, an ‘In Gene We Trust’ medallion, a beautiful full-color book packed with photos from my peronsal archives, and my stories behind the songs — and a very special surprise item from me to you. You’re not gonna believe the things we found.”
More information on “The Vault” will be made available at www.genesimmonsvault.com .