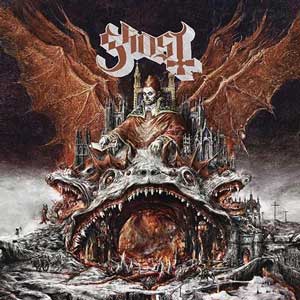 I can’t recall when was the last time that a relatively new band created such a buzz in the global music scene. Yes, the name of Ghost had already become huge since the “Meliora” spectacular release but now this has grown out of proportions! And as it is almost unavoidable in similar cases, Ghost is a band with many fans but also many haters.

Personally, I fit into the first category as I truly believe that Tobias Forge has achieved to put the hard rock sound into the mainstream media by retaining a mystical aura around the Ghost name but most importantly by raising the bar high in regards with the quality level of the songs.

We experienced the first taste of “Prequelle” with the astonishing “Rats” and “Dance Macabre”, two brilliant songs that could have easily found a place amongst other masterpieces like “Ritual” and “Cirice”. So, our expectations were great and our anxiety was even bigger. The Swedish outfit once again didn’t fail us…as a matter of fact; it truly mesmerized us as the new album includes only great moments that typically project a 70s retro atmosphere in the vein of Blue Oyster Cult and Eloy while only a few scattered Mercyful Fate elements can barely be traced (as Forge has diminished them since the “Opus Eponymous” days). I’d even go as far as I say that Ghost embrace a more optimistic style this time around that kinda remind of Alice Cooper’s “From The Inside” album.

The instrumental “Miasma”, “Pro Memoria”, “Witch Image” and of course the aforementioned “Rats” and “Dance Macabre” are the absolute highlights of a flawless album. I am not sure if “Prequelle” is superior to “Meliora” (that’s not really important) but I am positive that Ghost has evolved and once again deliver an astonishing record.

Highlight: The renditions of Leonard Cohen’s “Avalanche” and Pet Shop Boys’ It’s A Sin” are OK. I prefer Gamma Ray’s take on the latter song…