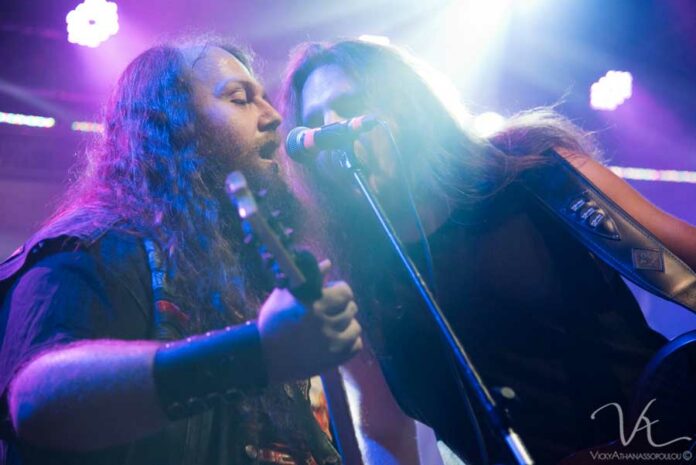 I could write a lot as a prologue but I prefer to keep to myself. Honestly though, I cannot understand why such a good effort from The Silent Rage doesn’t get the appropriate response. However, the few and chosen ones who went on Saturday night in Kyttaro, had a great time and I hope that something similar like that will happen again.

First on stage were the Athenian progressive metallers Solid Faith, who came out when there were about 30 people in the venue. They performed material from their debut “Eternal Quest” released in 2020, which although I had only heard once I remembered songs, melodies and lyrics. Which shows that they have done a very good job. A thumbs up also goes to their drummer Kostas Karapetsakos who played after just a few rehearsals, as he recently recovered from an accident. And of course, respect to their singer Theodore Martinis with the Cobra Kai t-shirt! Overall, a decent performance.

Setlist: Eternal Quest, Forgive Yourself, Stay Forever Young, Stare At Me, Gone In The Daylight, See Through Time, Lost In Faith

Next in line Kosmogonia, a folk/melodic death outfit with flute, brutal male and clean female vocals. Here I must admit that they were the only band that left me with mixed feelings. First, the music. The songs from their debut “Enthrone The Gods” (2020) were more folk/power and the only death element was the vocals. The two new ones they played from their upcoming record that will be released this year had a melodic death structure, they reminded me of Eluveitie at times and made a very good impression on me. The sextet was energetic and well prepared but also a negative element that their singer/guitarist Kostas Magalios very often shouted at the audience in a brutal voice “let’s go”, “are you ready”, “are you alive” and stuff like that, that were simply irritating. The new material sounded promising though, so I cannot wait to see what they have in store for us.

Up next, the special guests Dakesis from the glorious Birmingham. The prog/power quartet performed flawlessly, with enviable technical training from Matt Jones on guitar and Amie Chatterley on bass. The strange thing was that the sound was lower than the other bands, especially the guitar that I think should be a bit louder. I believe this was Dakesis’ choice though, as there were generally no sound issues with any of the bands that night. They played songs from the three records they have released and were more than excited to be in our country.

Before the end, the multicultural Primal Roots shook us up with a very strong performance, which will be their last for a while as their singer Rachel Cassar will have an operation and we wish her all the best. I saw them before at Under The Quarry last summer, but here they seemed much better and heavier. With two girls on backing vocals, a lot of mood, energy and great material, they showed that they are a band that will get people’s attention. It’s also important that you can’t put a label on their music since in their heavy metal they put influences from prog, doom and even thrash. A great example is the Slayer-like intro of “Say It”. They played almost the entire “Stand Up” debut album which came out last year, a new song and the only cover of the night, “Toxicity”, flawlessly. If they continue like this, the future belongs to them.

Setlist: Same Old Pain, Race To The Red Light, Say It, Who Cares?, Black, Stand Up, Send In The Clowns, Mystery, Toxicity (System Of A Down cover), Tribal Dream

I have written about The Silent Rage in previous reports and there is not much left to say. The band is in the best phase of their history, their second album is ready for release (more on that soon) and their live performances are characterized by tremendous energy. Michael Rinakakis is an ideal addition behind the microphone and proved it with incredible performance and high-pitched vocals that rocked the venue. Even if he was a little sick, I wonder what else he would do if he wasn’t. The setlist was mainly based on their debut album “The Deadliest Scourge” (2016) which now sounds much heavier live, as well as two new songs that show the great evolution of the band. If you are a fan of heavy/power metal, you must see them on stage. Congratulations for a pulverizing performance.

Setlist: My Race Won’t Last, Stormwarrior, The Deadliest Scourge, Sin Of A Pilgrim, Harvester Of Souls, Leading The Legions, Proselytize The Masses, The Serpent Lord, Code Of Destruction, Between Harmony And Sorrow, A Piece Of Eden

In conclusion, the first Ghostlands & Ravenlands was a great event. It started on time, finished before midnight (a rarity by our standards), had a low-priced ticket and made the attendees have a great night. Of course, a little more support would be needed from the fans of this music as well as the editors of the magazines. Especially since so many people came to see only their friends and ignored the bands playing before and after. Big words and extensive tributes to the Greek scene are fine, but when you don’t set foot in the concerts, you’re a lying clown. Simple as that.