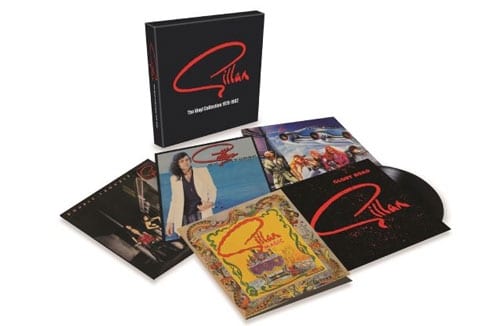 Demon Records announced the release of a new vinyl box set from Ian Gillan’s solo career circa 1979-1982 titled “The Vinyl Collection 1979-1982”. It will feature the albums: “Mr. Universe” (1979), “Glory Road” (1980; 2 LPs, with bonus disc “For Gillan Fans Only”), “Future Shock” (1981), “Double Trouble” (1981; 2 LPs) and “Magic” (1982). The albums are replicas to the original pressings, while exclusively in Amazon there is an editions that contains a bonus seven-inch single for “Spanish Guitar”. Gillan himself commented: It’s a wonderful thing, vinyl… Best held in two hands and treated with respect, as you place it carefully upon the turntable. You just bought something significant, not easily disposable. And look at the sleeves,” he commented, observing one of the records. “Aren’t they cool? Read the lyrics and enjoy the artwork, while you are in the groove. No computers involved in the making of this music… Enjoy.”