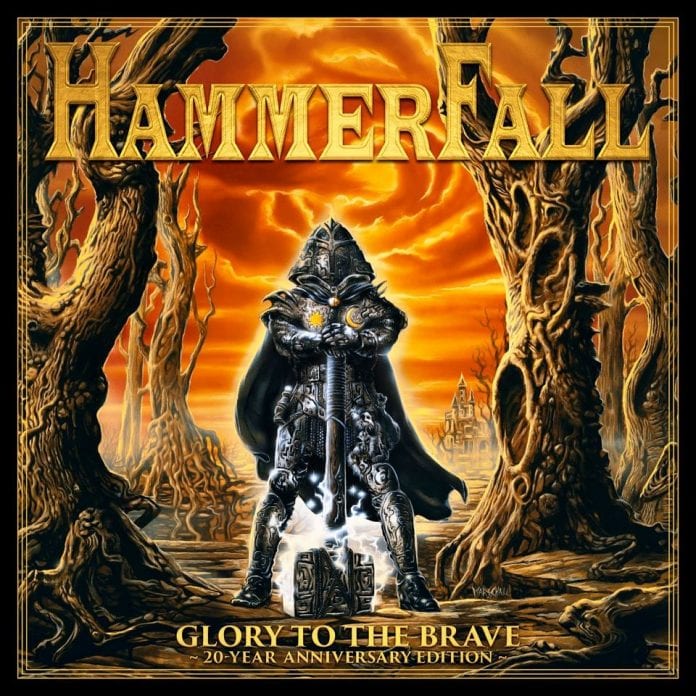 Hammerfall will release »Glory To The Brave – 20 Year Anniversary Edition« 2-CD/DVD box set on December 1st! The re-release includes the completely re-mastered version of »Glory To The Brave«, a radio edit of the legendary title track as well as the great cover version of the STORMWITCH classic ‘Ravenlord’. The bonus CD will include six live versions of ‘The Metal Age’, ‘Steel Meets Steel’, ‘Stone Cold’, ‘Glory To The Brave’, ‘Hammerfall’ and ‘The Dragon Lies Bleeding’ as well as a medley from numerous tracks off of their first-class debut album, which was recorded live this year at a show in Berlin.
In addition to this, the double CD will also be enhanced by a bonus DVD containing the first chapters of their »The First Crusade« documentary, which was originally published on VHS, as well as four new, historically edited interview chapters plus a live recording of their Dynamo Open Air show at Eindhoven in 1998. It will be available as a Digipak in an attractive box set, including a booklet containing detailed liner notes, many photos from the private archives of the musicians as well as magazine reports, flyers, posters and much more. Besides the 2-CD/DVD, you can also purchase the audio part separately, which includes bonus tracks as a double-vinyl in various colours.