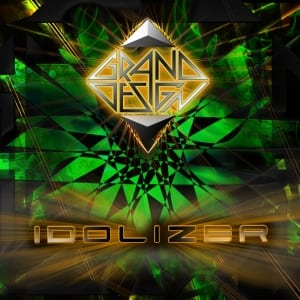 Rockpages had warned you a couple of years ago to keep an eye on Grand Design…as a matter of fact we had done an interview with them for the first acquaintances. With a style targeted towards the fans of the grandiose 80s hard rock sound in the vein of Def Leppard circa 1987-1992, Grand Design has set a goal to recapture and recreate that long gone but certainly much missed atmosphere.
It is surely a thin line between someone being characterized a copycat or a great musician with inspired influences. Personally, I put Grand Design in the latter category due to the fact that they compose excellent, memorable tunes but they also have the guts to try and produce their albums in the way that the one and only Mutt Lange did back in the day.
So, I can’t help but admiring Pelle Saether (the mastermind behind the Grand Design vehicle) when he achieves to record an album that resembles Def Leppard but also succeeds in leaving his personal stamp. “Idolizer” is not different compared to the debut “Time Elevation”. If I had to add a slight differentiation in there, I’d say that this album leans more toward the “Adrenalize” era than “Hysteria” (but, don’t take that for granted).
I wrote it in 2009 and I repeat it in 2011: Grand Design is a brilliant band and everyone should pay close attention to them. Get ready and prepared for a journey back in time when MTV constantly played “Animal” and “Let’s Get Rocked”.
Highlight: Wouldn’t be cool, if the album would be entitled “Idolize” following the Leppard tradition…?