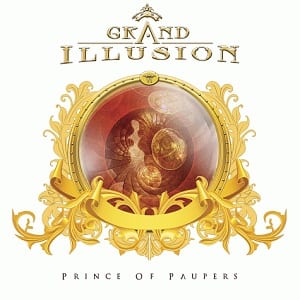 It’s a fact, gadies and lentlemen! It’s a darn fact! When Swedish peeps want to play Metal, they are simply amazing at it… However… When they set their minds on AOR… Then the bloody Universe in not enough! The band kicked off in 1986, the boys had numerous voyages and bumpy rides during the course of time; they laid back a bit in 2005, returned in 2010 and the result… Triumphant, to say the least! “Brand new world” was a melody ocean, the feedback was more than positive and the band members were already processing their next move!
They worked like crazy, wrote a dozen songs and headed to the States, to record along with the following gents. Gregg Bissonette, Steve Lukather, Jay Graydon and Tim Pierce! And the Prince of the Poor was born! In addition, the band collaborated with the famous musicman, arranger and conductor Paul Buckmaster (Elton John, David Bowie) and a few other fantastic musicians, which we’re gonna mention them ALL! Muris Varajic, Robert Sall, Stafan Stavert, Kjell Klaesson… Along with the usual suspects Arlene Matza-Jackson and Anders Rydholm – lyrics and music respectively – as well as the mighty Per Svensson, they produced an album that will drive every AOR fan crazy, no matter how far, no matter how old, no matter what!
Tell you what… Cinema fell in love with the radio hits, symphonic orchestrations got all sweaty in the back seat of the Grand Illusion mobile. Maaaan, dunno what to write really… Songs sound perfect; performance rate is beyond A++; Melodies are divine; Those dudes play songs that you instantly adore… They could play at an open air festival, it could be raining like Seattle and Manchester together and we’d still be on front row, dancing and screaming loud! Wot? You actually want me to mention some of the songs you’ll end up in love with? Gladly! “So faraway”, “Through this war”, “Gone”, “Better believe it”, “Under the wire”… We’re talking heavenly vocals here, vocals you can’t find anywhere in the map!
Perfect, Perfect, PERFECT!