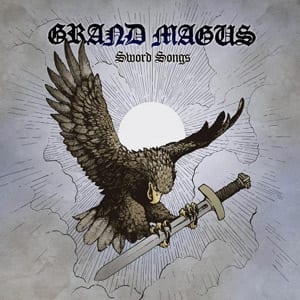 This is the eighth album for… Vikings’ Grand Magus of traditional metal filled with tales of swords, battles, fire, steel and blood.

It follows the same style with their previous one “Triumph And Power” only this time the songs in total are a bit faster, a bit heavier, therefore more aggressive and the drums sound even bigger. Freja, goddess of fertility, gold, love and sex sets the pace with the opening track (“Freja’s Choice”). It starts with a ground-shaking riff that is accompanied by a nasty growl and a second intoxicating riff just as it’s appropriate to the certain deity. Moving on things get more sing-along style with “Varangian” that sounds like a self-descriptor song for the bloodthirsty Vikings, without the solos! The intro of “Forged In Fire – Crowned In Steel” tries to fool you that things are slowing down, but the pedal fails to leave the metal and the song is devastating and battle-tested, just like the next one “Born For Battle (The Black Dog Of Broceliande)” that takes us to the mythical forest in medieval France, in an uncertain location, with uncertain weather, where Merlin’s grave lays (spooky!).

Grand Magus never leave the war path, they never bury their bloody axe and certainly won’t throw down their shield. So, “Master Of The Land”, “Last One To Fall”, “Frost And Fire” won’t allow us stop headbanging to the same themes with riffs that rise like mountain and bass and drums mightier than Thor’s hammer. “Hugr” that means heart, mind, soul is a sort interlude to the most epic song in the album, “Everyday There’s A Battle To Fight” that’s mide tempo with more everyday and relevant extensions where battles and fighting concern our personal life.

As an extra there are two bonus tracks, “In For The Kill” and the icing to the cake, Deep Purple’s “Stormbringer”. Once more Grand Magus throw an amazing album that will satisfy every metalhead out there. It’s already in the list with the best albums of 2016, a place earned by its sword.