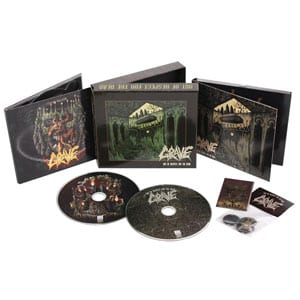 There is no need for introduction when it comes to this historic extreme metal band. From 1988 when they released their first demo and until now, Grave is a big chapter in the death metal scene worldwide. This is the 11th album for them and everything is as it was expected to be. Recorded in Studio Soulless in Stockholm, Sweden by the only original member of them, guitarist/vocalist Ola Lindgren, “Out Of Respect…” is a very good album that has all the elements to make a death metal fan enjoy it. It has been released on cd and vinyl, although I have to mention about the limited box edition. It is a very nice package, including the album in digipack edition, additional artwork, 3 metal buttons, a fridge magnet (EPIC!) and the “Morbid Ascent” EP (also in digipack) which was released in 2013 and it was previously only available in vinyl. In general, a very nice release from Grave.