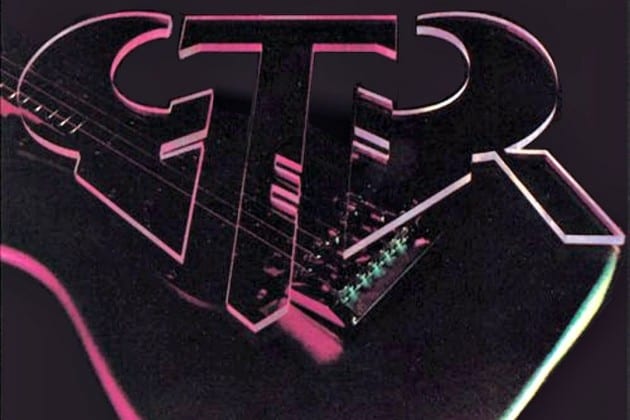 GTR, the short-lived band that united ex-Genesis guitarist Steve Hackett with Yes and Asiavet Steve Howe in the mid-’80s, is seeing its sole LP release return to stores in remastered and expanded form.
The new double-disc version of the GTR album, due Sept. 18, adds alternate mixes of “The Hunter” and “When the Heart Rules the Mind” to the original running order, as well as live recordings captured at the band’s Los Angeles stop on its 1986 tour. According to a press release issued by Esoteric Recordings, the label behind the reissue, this version also includes “a booklet that fully restores the original album artwork and features a new essay.”
A Top 20 hit after its release in July 1986, the GTR album — produced by Howe’s Asia colleague Geoff Downes — faced a sharply divided reception from critics and fans; even though radio was receptive enough to send lead-off single “When the Heart Rules the Mind” into the Top 40, GTR were also widely derided as an example of soulless corporate rock, with Musician critic J.D. Considine’s one-word review (“SHT”) ultimately serving as a cutting epitaph for the project.
Notably absent from the remastered and expanded GTR are any recordings from the ill-fated sessions for a follow-up effort, which Howe briefly spearheaded with a revised lineup after Hackett departed following the tour. Take a look at the complete track listing for the album, which is available for pre-order now.
‘GTR’ Deluxe Reissue Track Listing
Disc One (‘GTR: Remastered’)
“When the Heart Rules the Mind”
“The Hunter”
“Here I Wait”
“Sketches in the Sun”
“Jekyll and Hyde”
“You Can Still Get Through”
“Reach Out (Never Say No)”
“Toe the Line”
“Hackett to Bits”
“Imagining”
“The Hunter” (special GTR mix)
“When the Heart Rules the Mind” (single version)
“The Hunter” (single version)
Disc Two (‘GTR: Live in Los Angeles In July 1986′)
“Jekyll and Hyde”
“Here I Wait”
“Prizefighters”
“Imagining”
“Hackett to Bits”
“Spectral Mornings”
“I Know What I Like (In Your Wardrobe)”
“Sketches in the Sun”
“Pennants”
“Roundabout”
“The Hunter”
“You Can Still Get Through”
“Reach Out (never Say No)”
“When the Heart Rules the Mind”