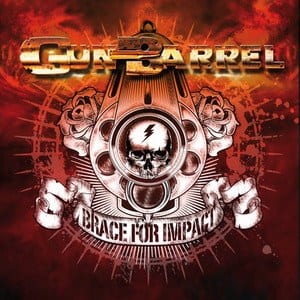 I’ve lost count about how many albums were released by those authentic rockers from Germany who make their come-back with another one that includes all those characteristics that will lead your hands to crank up the volume and get a beer from the fridge!
Finally, after I did some research online I found out that this is the fifth album of the band, and while I barely had some time to think about when it was when I was playing “Power Dive” all day (and night) long, and Rolf Tanzius was one of the first interviewees on Rockpages.gr, and “Brace For Impact” already grabs me by the throat! The rhythm is pounding and Gun Barrel’s old school hard rock that vows before Krokus, Motorhead and AC/DC proves quite enjoyable for all rock fans.
The lyrical themes are the least… unexpected! Gun Barrel sing about war, bullets, bombs, torpedoes, and other amusing stuff like that, with “Dancing On Torpedoes”, and the mid-tempo “Stand Your Ground” standing out. In general, this album will please all the band’s fans who’s been there since the beginning, and might win them some more!